Whose Body? by Dorothy L. Sayers

'As my Whimsy takes me,' is the motto of Lord Peter Wimsey, the aristocratic gentleman and detective whose hobbies include criminology, bibliophily, music and cricket, and he is the delightful hero of the golden age detective novelist, Dorothy L. Sayers.

Besides her Lord Peter Wimsey's crime novels, the author has penned plays and apologetic works such as The Mind of the Maker, and has published her own translation of Dante's Divine Comedy, so it comes as no surprise to find Lord Peter indulging in the classics or hunting for rare books in between his criminal investigations.

I mentioned in another post that Lord Peter Wimsey annoyed me in the first couple of books I read until I saw other facets of his character developed more fully in subsequent books. Whose Body? revealed the effects of the war on his nervous system after serving in the armed forces and the loyalty displayed by his man Bunter, who had been with him in active duty, and it made me like him all the more. 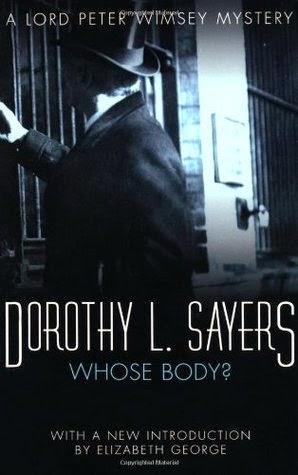 In Whose Body? we find Lord Peter Wimsey on his way to a book sale when he realised he'd forgotten his catalogue and had to return home. His man Bunter informed him on his return that his mother was on the telephone and wanted to speak to him. The Dowager Duchess of Denver, who was always of the greatest assistance in her son's criminal investigations hobby, had rung with the news that Mr Thipps, the architect who was building the church roof, had found a dead body in his bath.
Lord Peter embarks on a quest to solve the murder and has to contend with a bungling police inspector, a missing financier, an intellectually brilliant and dangerous criminal, in addition to an unidentified corpse.

It seemed, however, as though the man had melted out of society without leaving a gap or so much as a ripple. Assigning a motive for the murder of a person without relations or antecedents or even clothes is like trying to visualise the fourth dimension - admirable exercise for the imagination, but arduous and inconclusive.

Elizabeth George, a crime novelist herself, wrote this of Dorothy Sayers:

What continues to be remarkable about Sayer's work, however, is her willingness to explore the human condition. The passions felt by characters created eighty years ago are as real today as they were then. The motives behind people's behaviour are no more complex now than they were in 1923 when Lord Peter Wimsey took his first public bow...

One of the true pleasures inherent to picking up a Sayers novel now is to see how the times in which we live alter our perceptions of the world around us, while doing nothing at all to alter the core of our humanity.

Sherry said…
Lord Peter is annoying at first, deliberately so, I think. I know people who keep others at arm's length with their assumed air of silliness and dilettantish-ness (is there a better, real word for that?). It's certainly a protective mechanism in the case of Lord Peter Wimsey, and by the time you get through Gaudy Night (my favorite) and Busman's Honeymoon, you will have a bit of a crush on Lord Peter, I believe. I always have.
6 July 2014 at 04:41