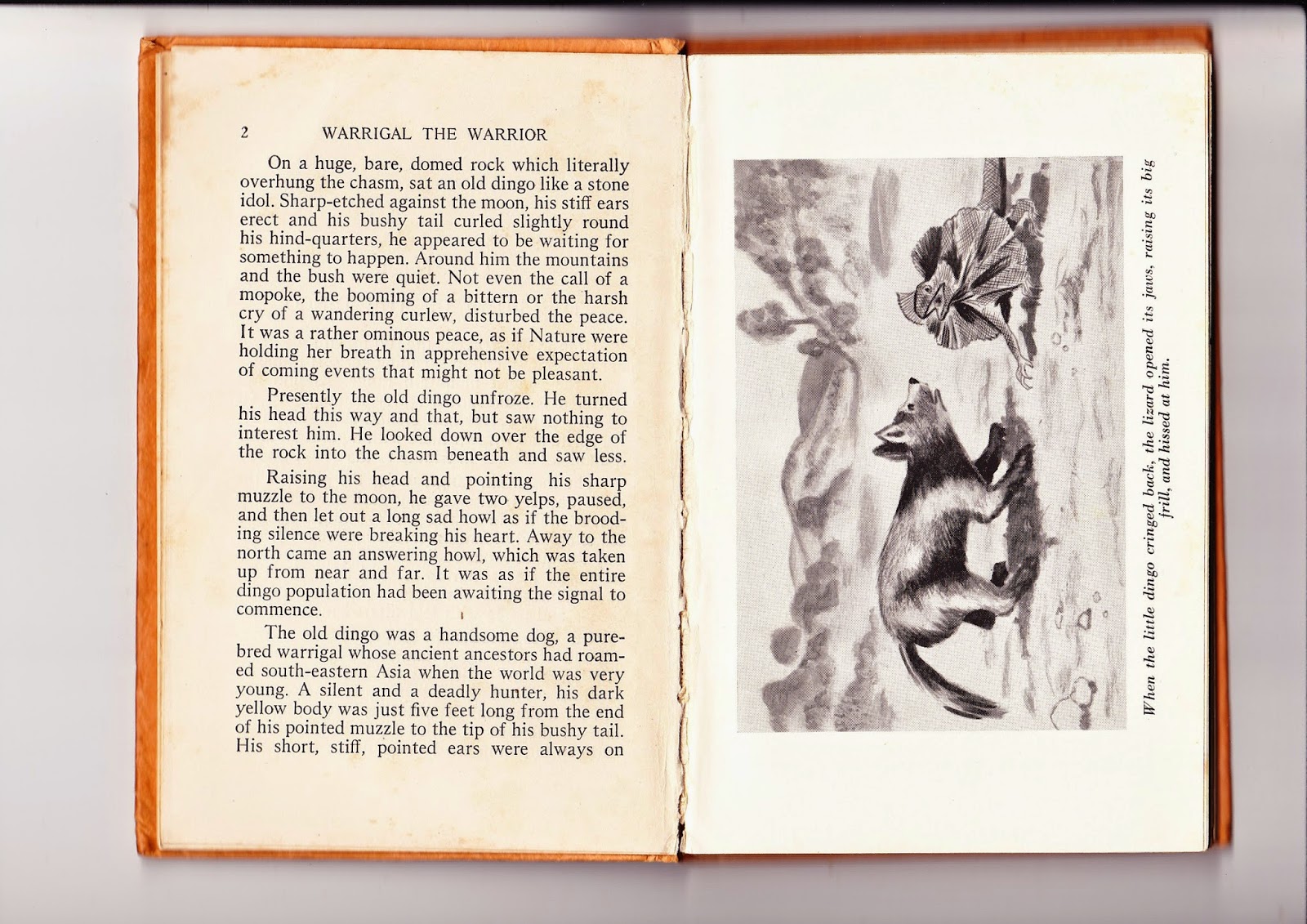 Unfortunately C.K. Thompson's books are all out of print but we've been fortunate enough to pick up a few at secondhand book shops and Lifeline book sales. Our copy of Warrigal the Warrior was published in 1948 and is a wonderful story based on the Australian dingo.

Charlie Harrison was employed as a dingo-killer or 'dogger' and in his travels he came upon a young part-dingo pup who had been separated from his parents. Harrison's first reaction was to immediately shoot the animal, but when the young dingo showed no fear of the man and gazed up at him curiously, the usually tough dingo-killer couldn't bring himself to do the deed. When the dingo then approached Harrison, licked his hand and allowed himself to be picked up, he won his way into the dingo-killer's heart.
Harrison returned to his camp with the dog and not long afterwards two weary prospectors came along and were invited to share a meal.
When the visitors realised that Harrison had a dingo pup and intended to keep it they were surprised and tried to talk him into killing the dog but he refused:

"Don't do it, mate," said McPherson earnestly. "You'll have nothing but trouble if  you start that. I've known other fellows to try to rear dingoes as pets and every one of them regretted it. So will you. Apart from anything else, you'll never hold him. He might stay with you for years, but in the end he will go back to the wilds."

"I don't agree with that at all," said Harrison. "He is only a pup now. If I can keep him away from the dingo pack from now on, he will become domesticated - just the same as if he were a sheep dog or a cattle dog. Why should he want to return to the dingo pack?"

"Because the wild and primitive life is born in him, " said McPherson. "Sheep and cattle dogs have been bred under domestic conditions  for thousands of years. They are part and parcel of human life, yet sometimes they go wild. So what chance have you got with a dingo?"


Harrison eventually took Warrigal into town when he went to visit his sister and her husband. When he had to travel to the city, he asked them to care for the dog, and gave instructions that Warrigal should be kept tied up at all times. His brother-in-law, unaware that the dog was a dingo, took pity on the animal and started to let him off his chain at night.  The township became perplexed when they started to find chickens, sheep and other animals that had been killed during the night with no trace of a perpetrator. The riddle was solved when a boy who had teased Warrigal during the day when he was tied up to his kennel, was given detention after school for fighting in the playground and was required to write an essay on Australian wildlife:

Moodily he turned the pages and came across another animal. The dingo. Yes, a few bits about dingoes would go well in the essay.


But as the boy began to write from the book, his interest became aroused. He threw down his pen and gave himself up wholly to reading.


"Dingo or warrigal...the Australian wild dog," he mumbled aloud. "It has a sharp muzzle, ears short and erect...bushy tail...color varies between light reddish brown and black...unable to bark, but yelps...at night howls dismally...a silent hunter..."
This book was a fascinating insight into an animal that has been little understood. When C.K. Thompson wrote this book more than sixty years ago he said in the introduction that,


There is a new generation that knows little about the bush and the creatures that inhabit it.

The tragic Azaria Chamberlain case in the Northern Territory in 1980 highlighted this:
"at the time, Australia wasn't able to believe that a wild dog could do such a thing."

And more recently an episode on Fraser Island, off the southern coast of Queensland that resulted in the death of a 9 year old boy.


I have not sought to glorify Warrigal, neither have I condemned him.
I have just tried to present him as he really is, without fear or favour, affection or ill-will.
He is as nature fashioned him.
C.K. Thompson


Warrigal the Warrior is 130 pages in length and is illustrated with black and white pictures. It makes a great read aloud and would be enjoyed by a wide range of ages.

Linking up this month with Brona's Books: 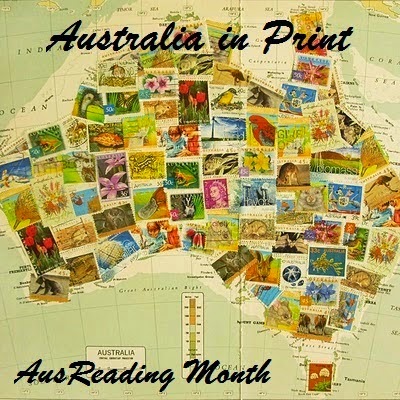 Brona said…
I've never heard of or come across this one before! Well done for finding it in a second hand shop & recognising it's potential.

Anonymous said…
Lovely review, I'm learning more and more about Australia via Brona's Books and her followers!
6 November 2014 at 22:16

Cat said…
I love the picture of the old book. Wonderful when you can find these old treasures.
16 November 2014 at 10:51

Carol said…
Hi Natilla, I used this book in AO 3 - https://journey-and-destination.blogspot.com.au/search/label/Ambleside%20Year%203
I read it aloud to my dd and her older brother, although my dd is quite an advanced reader. I think reading this one aloud is the best option for children Yr 3 & below. Monarch of the Western Skies would be a good read on their own for Year 3.
20 October 2016 at 10:28