We're in the middle our terms' work and I wanted to continue our regular schedule  in the lead up to Christmas but also allow room for celebrating Advent & preparing for Christmas. So what I've done is to stretch out a week's work into one and a half to two weeks. I do this from time to time if I need to fit in extra things that I think are important or if we've had a lot of interruptions.

As in previous years I've adapted music appreciation, poetry, folk songs, picture study and handicrafts to the season and this year I'm reading A Christmas Carol by Charles Dickens aloud and will also have some other Christmas books on hand for free reading.
We were reading of Scrooge's encounter with the Ghost of Christmas Past in A Christmas Carol this week. In Dickens' allegorical story the Ghost takes heartless old Scrooge back to the long forgotten scenes of his boyhood days:


'The school is not quite deserted, said the Ghost. 'A solitary child, neglected by his friends, is left there still.'

They went, the Ghost and Scrooge, across the hall, to a door at the back of the house. It opened before them, and disclosed a long, bare, melancholy room, made barer still by lines of plain deal forms and desks. At one of these a lonely boy was reading near a feeble fire; and Scrooge sat down upon a form, and wept to see his poor forgotten self as he used to be.

I've read Dickens' book before so I know the ending. It's really a story of Redemption.
Scrooge is a grotty, detestable & wicked old man who cares for no one and deserves nothing but judgement...but the unbelievable happens and Scrooge is transformed. Dickens' story illuminates what is at the heart of Christmas:

We're listening to this folk song again this year. It really does capture the joy and Good News of Christmas.

This year we're listening to the full version of Handel's Messiah. In the past we've used excerpts but Cindy's Handel's Messiah Schedule for Advent has made it easy to fit in. Just 6 to 10 minutes a day in the lead up to Christmas is very do-able and if you haven't started it yet there's still time. A few of the pieces are very short so you could easily fit two into a week and get it done.
I didn't think I had a full recording so we started off using this one on YouTube.

Then I discovered a secondhand CD I'd bought a few months ago and realised it was the version Cindy used on her schedule so we got that out only to find that instead of two CD's there was only one, so I'll be going back to YouTube for the second half. Just as well I only paid a dollar for it.

The approximate time for each section is included in Cindy's post, but an outline of the different parts is here which might be helpful and the text used by the singers is here.

The Story of Holly & Ivy by Rumer Godden

C.S. Lewis famously wrote that he was 'almost inclined to set it up as a canon that a children's story which is enjoyed only by children is a bad children's story.'
I didn't read this book when I was a child but I thought it was just lovely when I read it for the first time as an adult.
If you have a little girl (or a little boy) don't miss this book. If you're an older girl, like me :) don't miss it either.
Around the age of six and up would be a good time to give it to someone or it could be read aloud to a younger child - if you don't mind having a cry while you're reading. The edition below on the left is 57 pages long with charcoal illustrations throughout but the book was first published in 1958 and there have been numerous versions, including the one on the right below illustrated by Barbara Cooney. 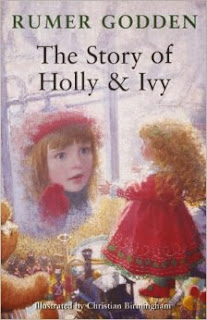 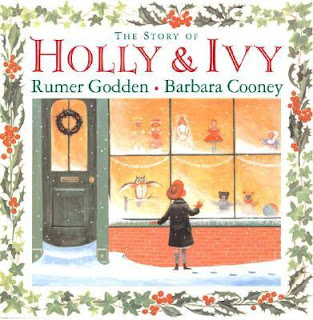 Like teddy bears, the dolls held out their arms. Toys, of course, think the opposite way to you. 'We shall have a little boy or girl for Christmas,' said the toys.

The toys knew what homes were like from the broken dolls who came to the shop to be mended.
'There are warm fires and lights,' said the dolls, 'rooms filled with lively things. We feel children's hands.'
'Bah! Children's hands are rough,' said the big toy owl who sat perched on a pretend branch below the dolls. 'They are rough. They can squeeze.'
'I want to be squeezed,' said a little elephant.

"Here is a trustworthy saying that deserves full acceptance: Christ Jesus came into the world to save sinners - of whom I am the worst."
1 Timothy 1:15

This will be the first time I have ever 'prepared' for Christmas.
I will join you reading Charles Dickens Christmas Carol, scripture and listening to Handel.
My choice will be a kindle version of the classic book, online bible and this version of the Messiah Stephen Cleobury with King's College Cambridge and the Brandenburg Consort.
I will prepare a blogpost and add my thoughts as a 'master post'. There you can read how I am doing!

Carol, my Christmas 2014 blogpost is uploaded and I have mentioned this your blogpost and Cindy's listening plan with a link to your websites. Thank you both for some wonderful suggetions to celebrate the Christmas spirit.

Nancy, so good to have you join me! Maybe next year we can organise one of those linky things. Look forward to reading your thoughts.

It has been many years since I read this Godden title. Thanks for reminding me of it. Have a wonderful Christmas!

Thanks for the great recommendations once again! I have a list for my kids to finish or regular school work, and they know that when they are done we will break until January =) I'm hoping they get done quickly so we can do lots of great advent celebrations!

Carol, I'm teaching the 4 & 5 year olds Sunday School at our church. Last week, we talked about Jesus being born in the stable and one of the little girls (who has a new baby at her house) was appalled by the thought that they'd put a baby in a feeding trough. "Our baby would not like that at all." How lovely that Jesus came to a grubby, dirty, filthy place to seek and save those grubby, dirty, filthy people like me and Scrooge. Thanks for reminding me.

Enjoying my preparation for Christmas! Here are my comments on The Messaih days 7 - 11.
Finished stave 1 ( Jacob Marley but still have to sort out my notes. I will publish the review as a seperate post on my blog.

Sorry here is the link for the Messiah comments day 7 - 11 !

A Christmas Carol: it was a wonderful book and does get met into the holiday spirit, thanks for the challenge!

Completed my listening challenge The Messiah on this Christmas Eve in the Netherlands.
I hope you and your family have wonderful Christmans!
My favorite choruses are: