Nature's Role in the Disposition of the Mind 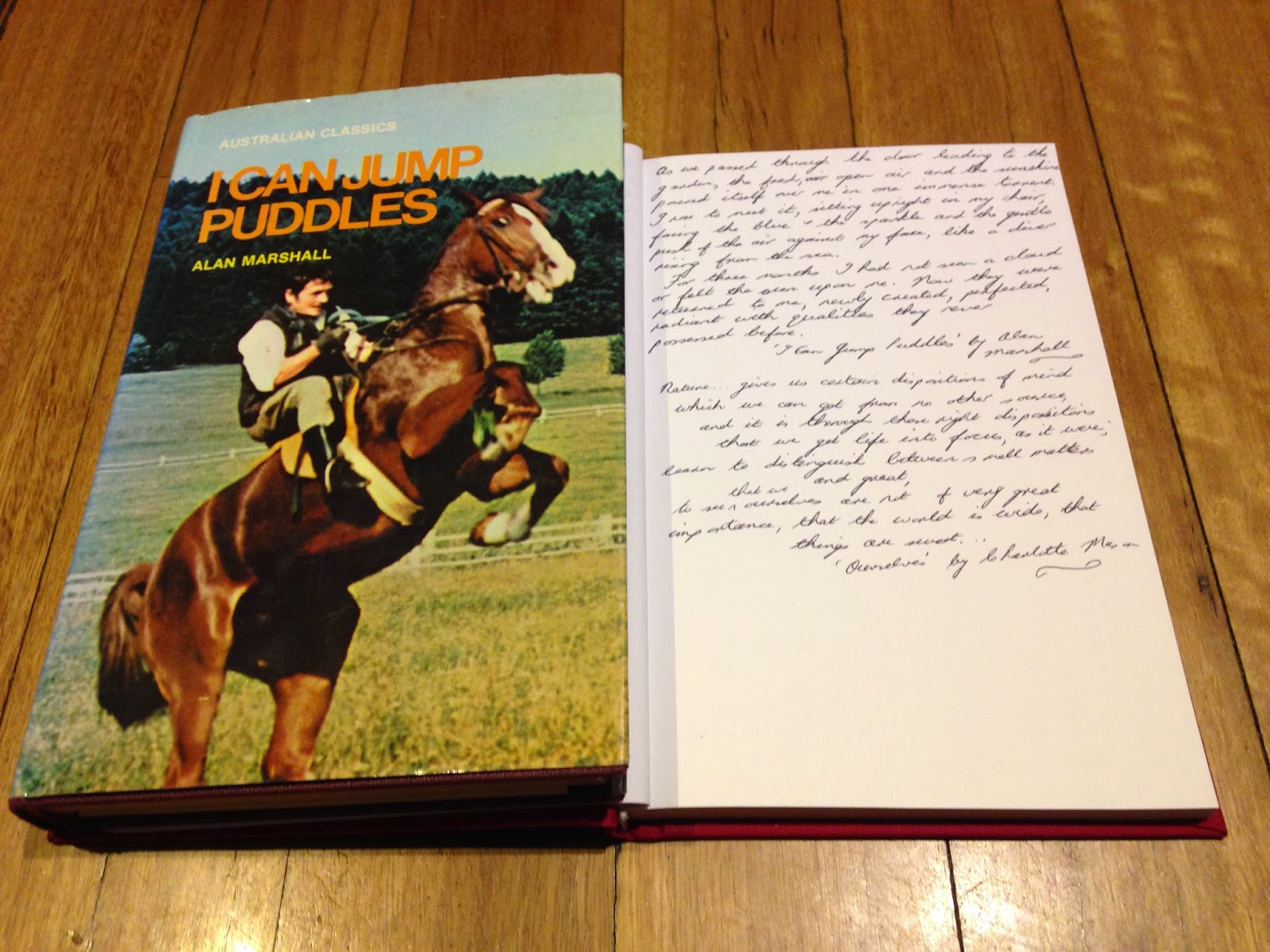 I've been reading aloud the Australian classic, I Can Jump Puddles by Alan Marshall, the story of a young boy who contracted polio in the early 1900's when an epidemic swept through Victoria.
Alan had been taken to hospital to have surgery on his lower body. He was encased in a plaster cast but there were some nasty complications and he was in misery from the constant pain he suffered.
One day his dad, desperate to cheer him, came to visit with a little new pup hidden beneath his jumper. He tucked the little dog into bed with Alan while the other patients kept a watch to warn of approaching nursing staff. It was a brief moment of contact with the world outside, but Alan soaked up the warmth of the little creature snuggled up beside him, and the sweetness of that filled him with strength and hope.
Later the day came when he could be wheeled outside:
As we passed through the door leading to the garden, the fresh, open air and the sunshine poured itself over me in one immense torrent. I rose to meet it, sitting upright in my chair, facing the blue and the sparkle and the gentle push of the air against my face, like a diver rising from the sea.


For three months I had not seen a cloud or felt the sun upon me. Now they were returned to me, newly created, perfected, radiant with qualities they never possessed before.
I was struck with the power of Alan's words. He was seeing things in a whole new way after a long separation. A common bird's call was a gift to him. Even the grains of gravel upon which his chair rested took on a beauty and their 'strange little hills and hollows' were delightful to him.
Sometimes it can be hard for a mother to get outside. There's washing to get done, dinner to be made, maths to be corrected, the bathroom's a mess, there are other more important things that need to be done...
Nature...gives us certain dispositions of mind which we can get from no other source, and it is through these right dispositions that we get life into focus, as it were; learn to distinguish between small matters and great, to see that we ourselves are not of very great importance, that the world is wide, that things are sweet...


Ourselves, Book II by Charlotte Mason
I usually try to get out and have a good walk a few mornings a week but I haven't been sleeping well and it hasn't happened for about two weeks. My motivation for walking was mostly fitness, but I've been aware that the omission has affected the disposition of my mind more than it has affected my body.
It's not the walking I need so much, although that is beneficial. It is the contact with the natural world that helps me to get my life into focus and helps me to distinguish between the great and the small.
Yesterday I sat in the sunshine for two hours reading and writing in my commonplace book while my children were having swimming lessons and later played with friends. I felt like Alan on that day he described above,
I hung my head and closed my eyes and the sun wrapped itself around me like arms.

It is still so cold here that I don't go outside much, but yesterday circumstances forced me to be outside. As I was wondering why God would want me out on the slippery snow, I heard a bird sing. And then another.

Though I was too tired to feel like Alan and you did, just knowing that there are birds and they still do sing was a revelation.

Our temperatures have quickly turned to summer here with the highs in the 90s and humidity equally high. I passed much of our best weather with so much fatigue--indoors. And it has affected my state of mind. Your words are so true. The struggle is so real as you described. Nature is God's second book, I've heard said. It truly does minister to our souls. Why do I resist? Thank you, Carol. Your post is so perfectly timed. God is so kind! Blessings to you my dear Aussie friend! I needed to read this today. Betty

I too rarely head outdoors with my children, but I know it's something I should do more of because I never regret it when I do. Maybe I can build the habit in the summer mornings we'll soon be having. I have a feeling that once I do get a habit going, it will be hard to give up!

Thank you. I don't like outside very much, generally, but CM and quotes like this are changing my mind.

Education is a Life said...

Yes! I've been indoors so much this winter with the new baby. Today the children were outside in the (deep,deep) snow and one of them lost a boot. I had to come out and rescue, and I realized that I was just hungry for outdoor time...the light and the freshness. I need it badly, and I'm waiting for spring so I can take my baby out, too.

I always found getting outside with babies difficult, perhaps because life was so busy. When we lived in Scotland where I was born, my mum who had 4 children at the time, took us outside every day - in drizzle & sleet most of the time, in a pram if we were little. We didn't have the depth of snow you have where you are though! The obstacle here is usually the heat more than anything.

I agree, Carol - getting outside, even if for only a short time every day, greatly improves my frame of mind. I just need to learn to leave the mess behind and go out! As my dh hubby tells me, "The work will wait for you, dear." :)
Thank you for a wonderful reminder.