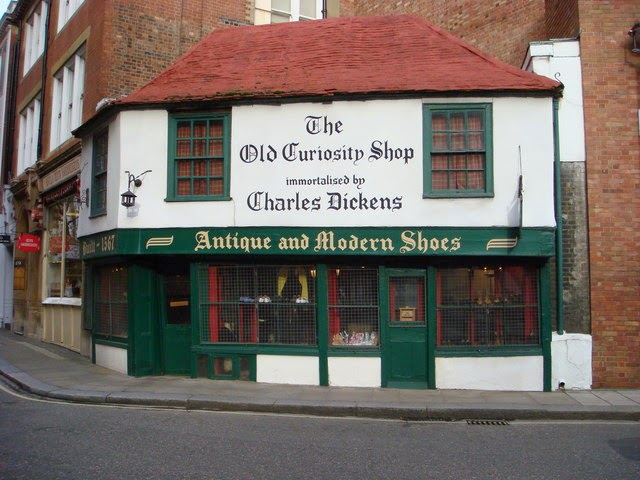 When The Old Curiosity Shop was first published in serial form in 1840 to 1841, its Victorian readers were enamoured with it. The story became an immediate success and so I was a little surprised upon reading the book at how much less enjoyable I found it compared to other books I've read by Dickens.

Whilst still retaining his wonderful way with words and introducing some remarkable characters, Dickens unfortunately overwhelms the story with sentiment, especially in regards to the main character, Nell.
Nell and her Grandfather are reduced to poverty and are forced to flee from their home in the old shop. Begging as they go, they travel away from the city and into the unknown. While they are wandering around the countryside, the story returns to events back in the city and Nell disappears for long periods in the narrative.
While she is sidelined, other characters appear who are more interesting, such as Quilp, the grotesque tyrant, evil and cunning:

Quilp...ate hard eggs, shell and all, devoured gigantic prawns with the heads and tails on, chewed tobacco and water-cresses at the same time and with extraordinary greediness, drank boiling tea without winking, bit his fork and spoon till they bent again, and in short performed so many horrifying and uncommon acts that the women were nearly frightened out of their wits, and began to doubt if he were really a human creature.
Richard Swiveller, an idle young man who regularly uses literary quotes to bemoan his fate, is a character who doesn't show much promise at first but his character develops and expands as the story progresses. And then there's the Marchioness, the mistreated 'small servant,' - nameless, parentless, locked up and deprived.

I mentioned in my post on A Tale of Two Cities that one of the delights of reading Dickens is his skilful ability to intertwine tragedy and humour. His clever juxtaposition of the two creates an atmosphere that makes for natural sympathy with his characters. This ability was less obvious in The Old Curiosity Shop.


G.K. Chesterton in Appreciations and Criticisms of the Work of Charles Dickens, made this observation regarding Dickens' use of pathos:

He strained himself to achieve pathos. His humour was inspiration; but his pathos was ambition. His laughter was lonely; he would have laughed on a desert island. But his grief was gregarious. He liked to move great masses of men, to melt them into tenderness, to play on the people as a great pianist plays on them; to make them mad or sad. His pathos was to him a way of showing his power; and for that reason it was really powerless. He could not help making people laugh; but he tried to make them cry.

I agree with Chesterton that:

The real hero and heroine of The Old Curiosity Shop are of course Dick Swiveller and the Marchioness. It is significant in a sense that these two sane, strong, living, and lovable human beings are the only two, or almost the only two, people in the story who do not run after Little Nell. They have something better to do than to go on that shadowy chase after that cheerless phantom. They have to build up between them a true romance; perhaps the one true romance in the whole of Dickens. 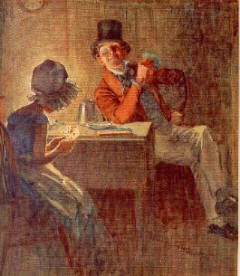 The short story, Dick Swiveller and the Marchioness, can be read online here.


'This poor little Marchioness has been wearing herself to death!’ cried Dick.
‘No I haven’t,’ she returned, ‘not a bit of it. Don’t you mind about me. I like sitting up, and I’ve often had a sleep, bless you, in one of them chairs. But if you could have seen how you tried to jump out o’ winder, and if you could have heard how you used to keep on singing and making speeches, you wouldn’t have believed it — I’m so glad you’re better, Mr Liverer.’
‘Liverer indeed!’ said Dick thoughtfully. ‘It’s well I am a liverer. I strongly suspect I should have died, Marchioness, but for you.’

I love those witty back and forth conversations. Quilp sounds awful.

Thank you for sharing your thoughts on this Dickens' title that I have yet to read. I appreciated Chesterton's thoughts too. I disliked this movie very much (but then again, the movie versions of Dickens' books are so depressing that they kept me from reading him for many years.) The books balance the humorous with the dismal much better than the films do.

I haven't read this work of Dickens yet, but I appreciate your thoughts on it. Thanks for being a part of Booknificent Thursday.
Tina

Yes...Dick and the Marchioness were the real charm of this tale. I'm a Dickens fan, but this was not one of my favorites. Still, Dickens is always a delight.

Hi Joseph, he definitely is. I'm long overdue on cracking open a book by him. 'The Mystery of Edwin Drood' and 'The Pickwick Papers' are two I haven't read yet.