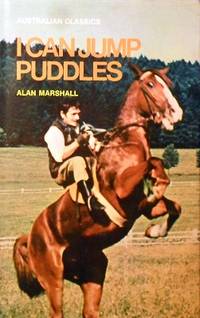 I initially picked up this book knowing it was an Australian Classic but with little knowledge of its content. It had been on our bookshelf, unread for years, until a few months ago when it caught my eye and I decided to use it for our read aloud. It is a fictionalised autobiography of the author and has sold over three million copies.

In the early 1900's, not long after Alan Marshall had just started school, a polio epidemic swept through Victoria. Very little was known about Infantile Paralysis (poliomyelitis) at the time and the word 'Paralysis' was associated with idiocy. When it became known that Alan had been struck down with the disease, the first question many people asked was, "Have you heard if his mind is affected?"

After he contracted polio, Alan's legs were left paralysed. Not long afterwards, the muscles in his legs began to contract and the sinews behind his knees tightened,  forcing his legs into a kneeling position. It was decided that he needed surgery and so he was admitted to the hospital twenty miles away.
Reading about a young boy's hospital experience in the early 1900's makes you realise and appreciate how much things have changed over the years.
Alan was the only child in a ward full of adult males. Visiting hours were strict; parents were not allowed to stay with their children and not much was communicated to either patients or families about anything. Admission to hospital was a frightening enough experience for an adult, let alone a six year old boy.
After he had recovered from his surgery, Alan returned home. His parents didn't have enough money to buy a wheelchair so his father made him a long, three-wheeled vehicle out of an old perambulator and each morning he was pushed to school in the pram by the children who lived down the road. Once at school, he left his pram near the door and walked into the school on his crutches.

'Children make no distinction between the one who is lame and the one who has the full use of his limbs. They will ask a boy in crutches to run here or there for them and complain when he is slow.'

Alan's father was a horse trainer and Alan had always wanted to be a horseman. After his illness his father explained to him that he could never ride - not until he was a man and could walk again - his legs could not grip and as he had to hold onto the pommel to keep his balance upon the horse, he had no control of the reins:

'I listened to him in silence. I did not believe what he said was true. I wondered that he believed it himself. He was always right; now for the first time he was wrong.
I had made up my mind to ride.'

This book is not just the moving story of a little boy who defies and overcomes a major disability but it is also a picture of a period that has passed. In the preface to his book Marshall writes:

'The men and women here described are a product of that period and they too are passing. The influences that made them self-reliant, forthright and compassionate, have given way to influences that can develop characters just as fine, but the mould has changed and the product is different.'

Some of the most memorable and inspiring features of the story concerned Alan's attitude to his 'disability.' As far as he was concerned, he didn't have one.

'Having a normal mind my attitude to life was that of a normal child and my crippled limbs could not alter this attitude.'


This is an inspiring book to read. Both poignant and humorous, there are some beautifully written nuggets contained within its pages. One of my favourite passages is here, when Alan is taken out into the sunshine after his prolonged stay in hospital. Although Marshall wrote the book as an adult looking back on his childhood, he never lost the ability to see with the eyes of a child. My ten and fifteen year old's enjoyed this description of Alan's science lesson:

'Once a week we were given a lesson called "Science." I liked this lesson because then we were allowed to stand round he table and you could push and shove and have fun.
Mr. Tucker opened the cupboard contains some test tubes, a spirit lamp, a bottle of Mercury and a leather disc with a piece of string attached to the centre. He placed these things on the table and said, "Today we are concerned with the weight of air which is fourteen pounds to the square inch."

This didn't make sense to me but the fact that I was standing beside Maggie Mulligan made me wish to shine so I proffered the information that my father had told me the fuller you are with air the lighter you are and you couldn't sink in the river. I thought this had some bearing on the subject...
The teacher was not impressed...
He then wet the leather disc and pressed it in the desk and none of us could pull it off except Maggie Mulligan who ripped the guts out of it with one yank and proved air didn't weigh anything.'

I Can Jump Puddles used to be required reading in Australian schools but it has largely been forgotten and most of Marshall's books are out of print. It's surprising that a book that deals with overcoming disability, written by someone who has been such an inspiration to children and adults in many different parts of the world has been neglected, especially when we now have a greater awareness of the needs and rights of the disabled.


Alan Marshall was awarded the O.B.E. for his services to the physically handicapped in 1972 and died in 1984.


This article was written for the 100th anniversary of Alan Marshall's birth and I quote from it below:

'...I think sooner or later, the Education Department will once again promote his work as an example of not giving in to adversity. And I think that's one of the reasons he was universally accepted. You could take his story and present it to any people in any country, and they could identify with his struggle against his pain and suffering. He really made good.'

I read this book aloud to a 10 and 15 year old & edited some parts for my younger listener. It would be a great read for older children in high school around 14 or 15 years of age. As with 'A Fortunate Life,' another wonderful Aussies classic, the author ultimately rejected God. I think this is important to discuss as it gets to the heart of what we believe about the character of God and why people suffer.

I Can Jump Puddles by Alan Marshall is my entry for 'A Forgotten Classic' in the Back to the Classics Challenge.

Thanks for another informative book review. And while of course I am enjoying all the reviews, I must admit I particularly like hearing about the forgotten Australian classics.

Great synopsis Carol ... I want to go out and read it now. Odd how we have these great Australian classics that are so relevant to today, we hear know the names of the authors but not the content of their books.

I will keeping this one in mind for later!
Thanks
M

Haven't read this book for years, you've re-inspired me to pick it up again.

I started to read the book but was concerned with his attitude towards God in the book. So I moved on to others books for the kids. Maybe I should pick it up again. How did it end Faith-wise?

From what I remember, Kirsten, it was mostly his Dad's attitude & ? some of the men in the hospital in the earlier part of the book but I read it aloud so edited bits & pieces. A Fortunate Life was similar. The author rejected God after his experience of Gallipoli. I edited that also for my youngest but I got her older brother to read it & then we talked about it. he was about 15 at the time, I think.

This is not a children's book. The language and racism is not appropriate for children today. You need to be a good Google searcher for a lot of phrases and words. God, blacks and Measurement lingo need parental guidance at least. I finally got around to reading it and I am 50+ year old teacher.

Hi John, I read this book aloud and edited parts, as I mentioned in a comment above, so the parental guidance was there :) Every generation has its blindspots and the racism in many of the older books written in previous generations was a significant blindspot. However, it happened, and I think books like this, judiciously used, are appropriate.'A Fortunate Life' by Albert Fahey is another Australian classic that raises similar issues, but in both books the overarching themes presented - children with disabilities, strength in adversity, plus the historical viewpoint, are important and leaving these books unread because they clash with the ideals of our own culture seems false to me. I appreciate you commenting & thanks for taking the time to do so.

I agree with Carol. people today are too fragile too mollycoddled. Jill McNamara, Omeo.

It was so refreshing to come across this article which pays tribute to the work of Alan Marshall and recognises its relevance for today. It is not just ‘I Can Jump Puddles’ which has been neglected, but the whole body of his work ranging from the second and third parts of his autobiography, the short stories, and his stories about his experiences with our indigenous people who, in turn, named him ‘Gurawilla’ which translates as storyteller. His story 'Wild Red Horses', as well as the children's book 'Lost in the Bush' are classic stories about bushfires which could well serve as cautionary tales for today. Some may not know that he was commissioned to write the story of Sidney Myer and The Myer Emporium which, in spite of some heavy editing, survives as a fascinating and meticulously researched historical picture of a Melbourne icon.

I worked as Secretary to Alan Marshall for ten years, when he lived in Eltham.

Hi Patrushka, thank you so much for taking the time to comment and sharing your enthusiasm for the author's work. Thanks also for mentioning those other books. I'll see if I can find them. I could imagine him being a bit of a character and it's sad to think his work isn't more widely known, especially his children's books. His overcoming attitude and the joy of life he had is very inspiring. Thanks again!