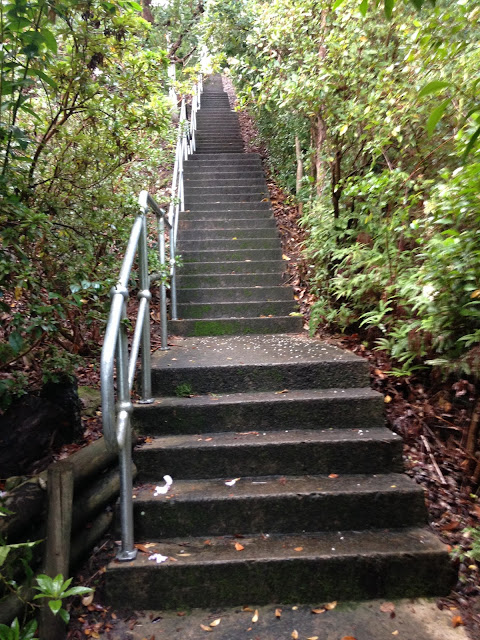 It's been nearly four years since we first started using Ambleside Online, which was also when I began to read the Original Charlotte Mason Home Education series. Up until then if I started a book, I'd generally finish it before I'd start another.
I began to notice how well my children were retaining with what they'd read over a period of months so I decided to try it for myself, although the idea didn't appeal to me at all.
So four years later I think I can say I've gone to the other extreme - I'm almost embarrassed to say that I'm still reading a book I started two years ago.
I've been enjoying the Back to the Classics Challenge that I started at the beginning of the year. The challenge is divided into categories which has helped me choose books I might not otherwise have read. I'm also continuing with the Classics Club Challenge which is over five years.
These are the books I'm in the process of reading (and keeping):

Uncle Tungsten by Oliver Sacks - nearly finished! I wrote a little about this book here and I'll write some more when I've finished.

Madame Curie by Eve Curie (the two year saga) - it was interesting to read in the book above that Oliver Sacks read this book and loved it when he was ten years old. He had the pleasure of meeting the author, Madame Curie's daughter, in her old age. 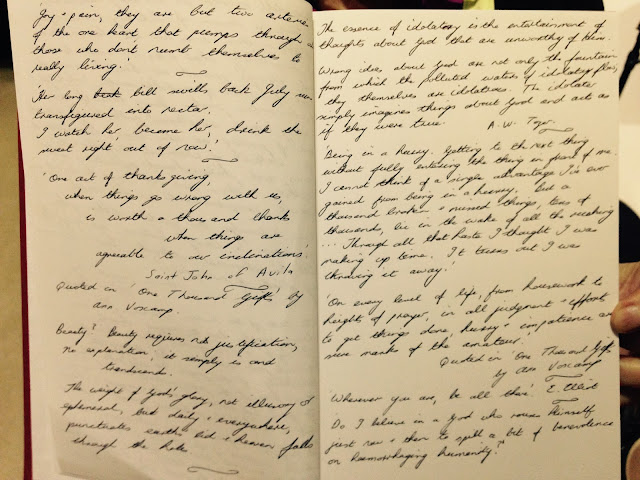 Knowledge of the Holy by A.W.Tozer - Tozer is direct and no nonsense. This is another of my slow reads.

The essence of idolatry is the entertainment of thoughts about God that are unworthy of Him. It begins in the mind and may be present where no overt act if worship has taken place...


Wrong ideas about God are not only the fountain from which the polluted waters of idolatry flow; they themselves are idolatrous. The idolater simply imagines things about God and acts as if they were true.

One Thousand Gifts by Ann Voscamp - I didn't think I'd like this book but by the end of the first few chapters I was sucked in. Suffering, pain, joy, gratitude...I keep getting hit with beautiful thoughts. The writing is a grammar jungle but I love the heart of what she is sharing - and I needed to hear it.  Some quotes that I loved:

Joy and pain, they are but two arteries of the one heart that pumps through all of those who don't numb themselves to really living.

On observing a hummingbird:

Her long bill swills back July sun transfigured into nectar.


I watch her, become her, drink the sweet right out of now.


Beauty? Beauty requires no justification, no explanation; it simply is and transcends.


The weight of God's Glory, not illusory or ephemeral, but daily and everywhere, punctuates earth's lid and heaven falls through the holes.


Do I believe in a God who rouses Himself just now and then to spill a bit of benevolence on haemorrhaging humanity?

The Abolition of Man by C.S. Lewis - I usually find Lewis very readable but this has been hard going for me. I'm taking it paragraph by paragraph and I'm still having to re-read sections.

The Man in the Brown Suit by Agatha Christie - pure pleasure. I sat up later than normal last night to finish it.

The Formation of Character by Charlotte Mason - I've been reading this for about 9 months and have written about it here & here and probably in other places as well. It's good.

Ourselves by Charlotte Mason
I Can Jump Puddles by Alan Marshall - an Australian classic which we finished today.

Mansfield Park by Jane Austen - a re-read but it's not my favourite Austen. I just discovered Jane Austen's phrase which Charlotte Mason appropriated, 'warming the imagination.' I'd been wondering where in Jane Austen's writing it came from and I obviously didn't catch it when I read the book awhile back.

On the present occasion she addressed herself chiefly to Miss Crawford and Fanny, but there was no comparison in the willingness of their attention; for Miss Crawford, who had seen scores of great houses, and cared for none of them, had only the appearance of civilly listening, while Fanny, to whom everything was almost as interesting as it was new, attended with unaffected earnestness to all that Mrs. Rushworth could relate of the family in former times, its rise and grandeur, regal visits and loyal efforts, delighted to connect anything with history already known, or warm her imagination with scenes of the past.

Quick, I'll come back later, but Mansfield Park is *my* favorite Austen. I hope this reading is lovely. And if you can ever get your hands on Peter Leithart's Miniatures and Morals, you might love MP that much more.

My dd used that book a couple of years ago but I haven't read it. You've made me curious now.

I actually did get hands on Miniatures and Morals because Carol mentioned it. I have been reading classics more and more also....especially year 9 of AO. We always have better discussions if I read the books but I am enjoying them also.

I love that photo...do you also get inspiration from doors, windows, and the like? I often do. :)

This is a lovely posts!!! BOOKS!!! Ahhh...I could talk about them for hours. I'm S L O W L Y reading my selections for the Back to Classics book challenge also. I actually think your handwriting is lovely!

Tozer is good, isn't he? Kinda like Chambers. Hits you deep in the heart. I really enjoyed One Thousand gifts and I laughed at your apt description of a "grammar" jungle. Yes!!! I actually REALLY enjoyed her adult Christmas title also.

I started Ourselves this year for MYself ;), but it's been slow going for me. I need to read it when it's quiet which it isn't around here often. :) I feel a little confused about the allegory - lands - lords etc... ;) I know I will enjoy it once I find the right moment to read it. :) I did finish Parents and Children and I REALLY enjoyed that.

Oh and I just finished rereading Pride & Prejudice...maybe I will read Mansfield Park next! :)

I liked his other book, Brightest Heaven of Invention and bought M & M because my dd loves Jane Austen.

If I go for a walk I have to face these stairs at some point. If I'm feeling energetic I'll go up. If it's cold I'll also (sometimes) go up because we're in a valley & it gets me into the warmth more quickly than leaving them till the end of the trail. I get inspiration on my walks after I get over going up the stairs...& if I get into a good conversation with a friend. Not doors & windows generally!
I'm actually reading through a few of CM's books but have been more intentional with Formation of Character and I can relate to the lack of quiet. Even though there's only two around all the time these days they are very talkative & competitive with each other.

PS after a walk this morning I was 'inspired' to change my blurb on the photo to 'step by step.'

I picked up Voskamp's book at a time when it didn't appeal to me. Your quotes make me want to give it another try, especially the one about joy and pain.

I too was "reformed" in my reading from one by one to several going at once, spread out over time, and it has made a huge difference in my engagement with and thoughtfulness about the books. I think that is one of the lesser-appreciated secret powers of a CM education!

Love that "warm her imagination" line. It's funny because when I first through all of Austen's books one summer in college (see--I am a reformed slow reader! LOL), I listed MP as my favorite. I loved it immediately, and I'm still not entirely sure why, since now I too like it least (well, besides NA). I would need to read them all back-to-back again to understand my thought process during that time, I think. But I'm guessing it had something to do with Edmund being more attractive a love interest than the other "leading men" right then. ;)

Miniatures and Morals has been on my TBR list for a long time, and I think I need to add some Charlotte Mason to that list. What Charlotte Mason book would you recommend for a beginner?


Sherry, I started with Volume 4, A Philosophy of Education, because I had older children. It was written later in her life after many years of practical experience in teaching. It's less idealistic than her earlier books and at the stage I was at the time, it was a good choice. I often reread sections. Ourselves also covers character training. There's a summary of her six books here: https://www.amblesideonline.org/CMM/Summaries.html
I also liked Vol 3, School Education.

Sorry, slip of finger on my phone - Philosophy of Ed is volume 6, not 4.

I am still trying to learn to read more than one at a time without stressing out about the stack. It's easy for me to look at it like a to do list I stead of a joy and pleasure. I'm getting g there though. I feel the same way about Mansfield Park and Ann Voskamp's writing. I just can't get through all her imagery sometimes. I'm sure its beautiful, if I could just figure it out! And Mansfield Park was definitely not my favorite book or movie. I just got vol. 6 from the library, but trying to finish up Anthony Esolen first. See what I mean? ;)

It was partly because I was taking so long to get through some books (and Esolen's was one) that I added more - different categories usually, which was refreshing. If I'd stayed with just one book my reading life would have come to a grinding halt. I don't always feel like I can tackle certain authors so just put them aside for a little while until I've got the wherewithal to take them up again.

Yes, reading many books at once is a wonderful way to spread out the learning and the joy. But after years of doing that I am now heading back into trying to read fewer books at a time. Perhaps that is not a good thing, I'm now thinking. Thanks for this thought provoking post!

I love hearing about what others are reading!
I've been having trouble finishing books lately - I read too many at once and then I max out the number of allowed renewals at the library.
Love your commonplace! I've been reading with a notebook to outline and quote significant passages and it is greatly improving my retention and ability to stay awake!

I too have difficulty reading Voskamp; her style is a bit hard to follow but her ideas are so beautiful!

Hi... books! oh, books!
I am doing the back to the classics, even though I did not link on time. I am still doing it along with my own reading pursues.
I love reading what you read. I agree, Christie (and to me Sayers too) are that addictive. I also HAD to finish Strong Poison by Sayers, which I did... I want so bad to open another one of hers... but not now, LOL, not yet. I have to continue a bit with the harder yet lovable titles I'm reading.