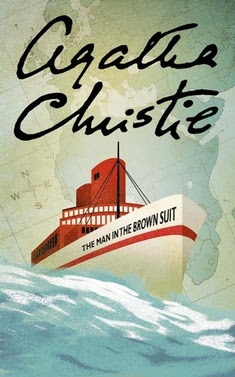 The Man in the Brown Suit is the fourth book I've read by Agatha Christie, the 'Queen of Crime.' I read Murder on the Orient Express and Death on the Nile years ago and wasn't inspired enough to read any more of her novels but a couple of my children really liked The Secret Adversary so I eventually decided to read that. This is the first of Christie's Tommy & Tuppence books (she wrote five starring these two characters) and the setting involves the World War I sinking of the Lusitania. I did enjoy this book, probably because Hercule Poirot wasn't in it. I really don't like his character and it was interesting to read that even Agatha Christie got fed up with him and his idiosyncrasies.
I was trying to decide on a title written in the 20th Century as part of the Back to the Classics Challenge. I had a few books in mind but the other week I decided to clean our floor to ceiling bookshelves and discovered a whole lot of books that I'd forgotten or hadn't read yet. They included a row of Agatha Christie titles.

I've always wondered why she has been so hugely popular - her books have been translated into over one hundred languages and she is the best-selling novelist of all time. I really didn't think Murder on the Orient Express and Death on the Nile were notable at all. The Secret Adversary gave me some hope that I might actually enjoy some other titles.
Then along comes The Man in the Brown Suit and I think I've totally changed my mind about Christie.

Published in 1924, this book was a pleasure to read. Fast paced and delightful - and no Hercule Poirot.
Anne Beddington, an attractive young woman, is left orphaned and penniless when her archaeologist father dies. When she witnesses the accidental death of a stranger who falls and is electrocuted on an Underground platform, she also sees a man in a brown suit examine the body, pronounce him dead,  and then quickly leave. As she turns to go also, she sees the 'doctor' break into a run, dropping a piece of paper as he does so. With this piece of paper and its cryptic message, Anne embarks on a journey which takes her all the way to South Africa on a wild adventure. With a backdrop of political intrigue and murder, stolen diamonds, kidnappings and threats on her own life, Anne determines to solve the mystery of the man in the brown suit.
The book is written by two narrators: Anne, and Sir Eustace Pedler, MP and it is a thrilling story. I really enjoyed the humour sprinkled throughout this book, which was in keeping with Anne Beddington's personality, and the conclusion of the story was novel and unexpected.
It's an excellent introduction to Agatha Christie for ages around 14 years and up.

The Secret Adversary is a good introduction to Agatha Christie for a younger reader as it lacks the romantic elements of The Man in the Brown Suit.


'I suppose it is because nearly all children go to school nowadays and have things arranged for them that they seem so forlornly unable to produce their own ideas.'

The BBC archives have a short video from 1955 in which Agatha Christie talks about 'her lack of formal education and how boredom during childhood led her to write 'The Mysterious Affair at Styles', which was completed when she was still in her twenties. She outlines her working methods and discusses why it is much easier to write plays than novels.'

This book is my entry in the Back to the Classics: 20th Century Classic category.

at June 14, 2015
Email ThisBlogThis!Share to TwitterShare to FacebookShare to Pinterest
Labels: 50 Classics in 5 Years, Agatha Christie, Ambleside Year 2, Back to the Classics 2015, Books for Teens, Mother Culture, The Classics Club

I appreciated your thoughts. I, too, have never finished a Christie novel and said, "Gee, I can't wait to get to the next one!" This sounds like a good option.

Sounds like a great read. I actually did see an Agatha Christie book out this morning on our morning out to the local markets { in search of more books, ha ha ha }. I passed her over though because I'm still in the children's section. Among my little stash this morning I found 2 beautiful illustrated Alice's Adventures in Wonderland { which I needed and sure beats having to print the book out on 400 odd pages, even if it would look pretty }. I also scored one of the books from the Narnia series { I've ordered the complete collection after discovering that it's on AO 4's book list, but I've got a little girl in a hurry and she couldn't wait, so the book had to come home with us } and yeah, a couple of other good finds too.

I ADORE Poirot... ha ha ha, I agree with Death on the Nile, I don't love it either, I did enjoy Orient Express, and the last Poirot, The Curtain, is my favorite Christie. I also liked There is a Tide. Christie and Sayers are my summer reads... light but they usually offer me something in the way of character analysis, personality, etc.

I read most of the Christie books when I started highschool (many moons ago) with mixed reactions.

Like you I didn't like Poirot; I also developed a loathing for Miss Marple after the first couple!
But Tommy & Tuppence are wonderful as are many of the stand-alone titles.

Thanks for reminding me of a more innocent time in my life :-)

The Man in the Brown Suit sounds like a fun book to read! I'm putting it on my reading list. Thanks. :-)

Recently read and enjoyed that one. I didn't like Poirot at first but he grew on me. Fascinated that AC got sick of him, lol

I'm willing to give him another try. Just not sure what to pick...