The Legend of Sleepy Hollow by Washington Irving

The classic tales Rip Van Winkle and The Legend of Sleepy Hollow first appeared in Washington Irving's Sketch Book in 1819-1820. I read both of these short stories for the first time this year. As with many other classics, I had a vague idea of the story line but had never actually read them for myself. Both books are included in the AmblesideOnline curriculum for Year 4, which is the year my daughter has just completed so I ended up reading them aloud to her. She enjoyed them both but really appreciated the humour contained in The Legend of Sleepy Hollow.
This book is a mix of both satire and humour and as I needed to choose something in that very category for the Back to the Classics Challenge I've been doing this year, I decided it would be my choice for this category. (Thanks to Nancy for suggesting this book to me earlier this year)


The same spirit of playful satire and protest against the restless energy and over wakeful enterprise of most of his fellow-countrymen around him seems to have inspired the author of the "Sketch Book" in selecting the title of this story.
Preface by the Illustrator, George H. Boughton.

The people of Sleepy Hollow, located on the eastern shore of the Hudson River, were given to all kinds of superstitious beliefs and fancies, but the belief in the legend of The Headless Horseman was the most pre-dominant.
Into this rustic area of the Hudson came the worthy schoolmaster, Ichabod Crane, a native of Connecticut:


...a state which supplies the Union with pioneers for the mind as well as for the forest, and sends forth yearly its legions if frontier woodmen and country schoolmasters.

The revenue arising from his school was small, and would have been scarcely sufficient to furnish him with daily bread, for he was a huge feeder, and though lank, had the dilating powers of an anaconda...

Ichabod's appetite for tales of ghosts, goblins and the supernatural was equal to his appetite for food, and this propensity had been increased by his residency in the area. Although looked up to by the residents of the area as a man of learning and elegance, he was totally gullible when it came to the superstitious.

'No tale was too gross or monstrous for his capacious swallow.'

One of his pleasures was to pass long winter evenings listening to tales of haunted houses, goblins and of course, the headless horseman. He in turn would tell his own anecdotes of witchcraft and omens.
But it was one thing for Ichabod to tell his haunting tales sitting by the glow of a cosy fire but quite another to face his own shadowy spectres as he walked home by night. 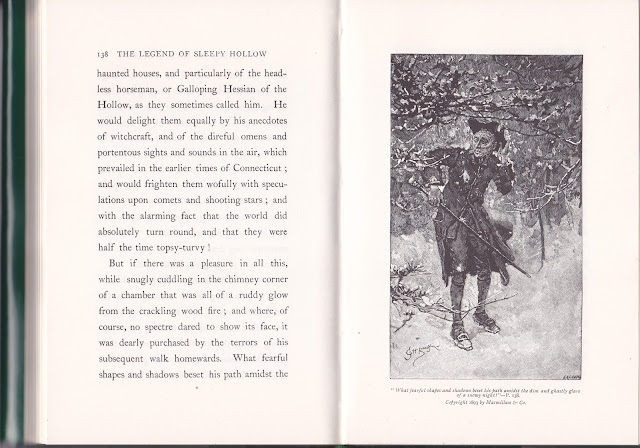 Before long, Ichabod set his eyes upon pretty Katrina Van Tassel, the daughter of a substantial Dutch farmer, and decided to visit her father, Baltus. Upon entering the farmer's house and laying his eyes on the delights it contained, Ichabod had made up his mind that he would gain her affection. However, he was up against a formidable rival, the young Tartar, Brom Bones.
Brom was chivalrous in a rough sort of way and would have settled the matter by open combat but Ichabod knew his opponent was physically superior and he made sure there was no opportunity for this. 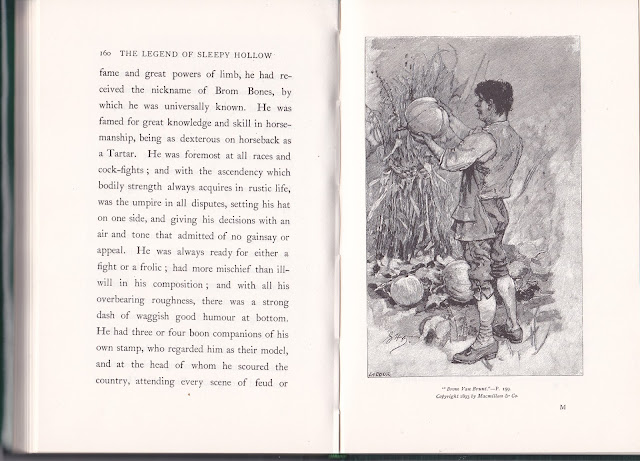 One afternoon an invitation came to attend a 'merrymaking' at the Van Tassel's. Ichabod allowed his scholars to leave early and he spent extra time attending to his appearance before setting off. When he arrived at Van Tassel's his gaze was absorbed not by the beautiful young ladies present but the sumptuous array of food at the banquet, to which he did ample justice.


He was a kind and thankful toad whose heart dilated in proportion as his skin was filled with good cheer; whose spirit rose with eating, as some men's do with drink. He could not help, too, rolling his large eyes round him as he ate, and chuckling with the possibility that he might one day be lord of all this scene of almost imaginable luxury and splendour. Then, he thought, how soon he'd turn his back upon the old school- house; snap his fingers in the face of Hans Van Ripper, and every other niggardly patron; and kick any itinerant pedagogue out of doors that should dare to call him comrade!

Ichabod was in his element that evening as he danced with Katrina, but the lovesick Brom Bones sat jealously in a corner by himself, brooding.
As the evening advanced, the supernatural stories began and various hair-raising tales were narrated with zest. Brom Bones rose to the occasion, matching the various stories by the vivid account of his adventure with the Galloping Hessian, the headless horseman of legend.
At the end of the evening, Ichabod lingered behind to speak to Katrina of his intentions, but he was repulsed and left the farm crestfallen. In desolation he made his way towards the very place where many of the scenes of the ghost stories had been set...
His rival had taken the measure of the gullible school master and had laid his plans accordingly. 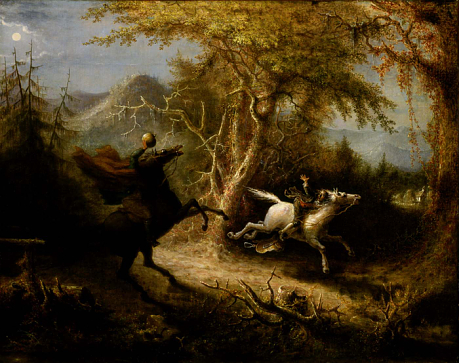 An interesting connection with this story: What "The Legend of Sleepy Hollow" Tells us About Contagion, Fear and Epidemics.

Silvia said…
I'm still pursuing the challenge, even though I did forget to sign up at the blog on time. My dd started with this title, asked me to read aloud, I did, but we left in the middle, but I loved it, so we surely need to come back to it and finish it. I love Irving's style. (We got as far as to have enjoyed the quote you shared. What characters, these two)
19 September 2015 at 12:52

Carol said…
I had a couple of hilarious narrations after some of the chapters we read.
19 September 2015 at 16:13

Lisa said…
I love Washington Irving and also read these aloud to my children when they got to yr4. My youngest will be in yr 4 next year, and I am looking forward to sharing them with her.
Love these living books! :)
21 September 2015 at 21:35