Once there was a dark, stormy night in spring, when, deep down in their holes, the wombats knew not to come out, when the possums stayed quiet in their hollow limbs, when the great black flying phalangers that live in the mountain forests never stirred. On this night, Bel Bel, the cream brumby mare, gave birth to a colt foal, pale like herself, or paler, in that wild, black storm.


The Silver Brumby was published in 1958 and is the first book in a series of thirteen novels written by Elyne Mitchell. It is the story of Thowra, a young colt born during that stormy night on the Australian Alps. The story follows Thowra through his early years as he learns from his mother the cunning and wisdom needed to survive in the wild. His lifelong battles with men who prized him for his silvery coat, the friction with other stallions as he comes to the peak of his strength, and later, the birth of his own daughter, Kunama, is told with vigour and close attention to detail. 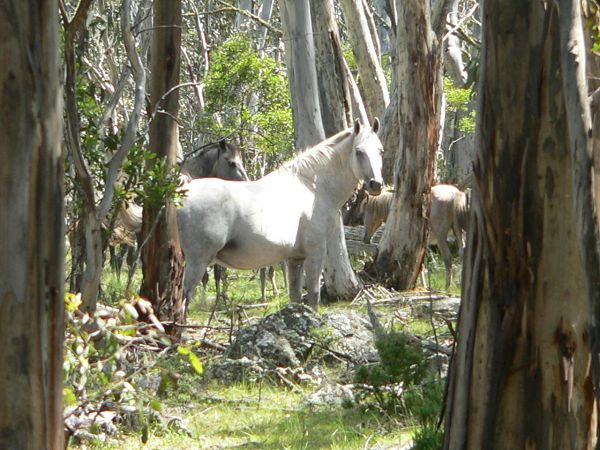 Spring comes to the Australian Alps like an invisible spirit. There is not the tremendous surge of upthrust life that there is in lowland valleys, and no wild flowers bloom in the snow mountains till the early summer, but there is an immense stirring of excitement. A bright red and blue lowrie flits through the trees; snow thaws, and the streams become full of foaming water; the grey, flattened grass grows upwards again and becomes greener; wild horses start to lose their winter coats and find new energy; wombats sit, round and fat, blinking in the evening sunshine; at night there is the cry of a dingo to its mate.


Wildflowers on the Australian Alps in Summer 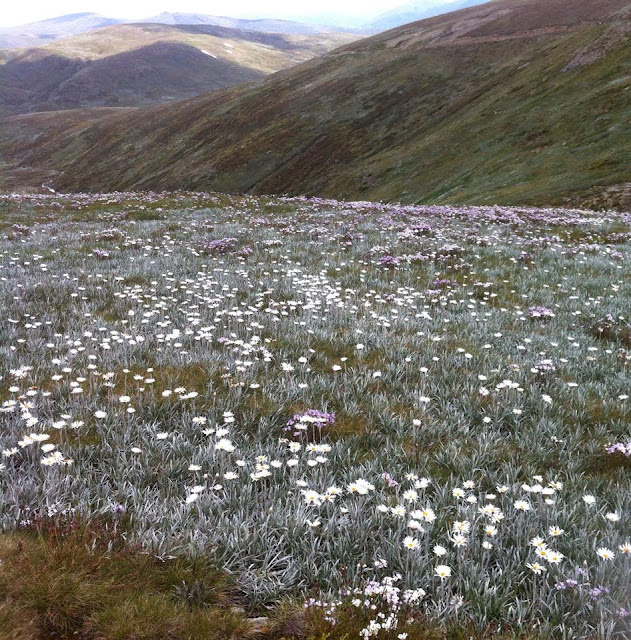 Elyne Mitchell grew up around horses and married a grazier. She had a close connection to the land, especially the Snowy Mountains area, and the places she describes in her books are those that were familiar to her.
I've visited the Snowy Mountains a few times and her writing evoked memories I have of the area. There is a ring of authenticity as well as a literary quality to her writing.

All the world was very quiet, high up there on the range. It was rarely that any other horses, except Storm and his herd, ever came as high, and most animals were already heading lower, anyway, before the snow came.
They saw dingoes, and occasionally a red fox, his pelt thick and good for winter, would show up against the grey-green grass. Thorwa noticed how busy the scurrying insects were, from the tiny ants to the great bright blue and red mountain grasshoppers - but he, too, knew that it was going to be a heavy winter.

Summer on the Snowies 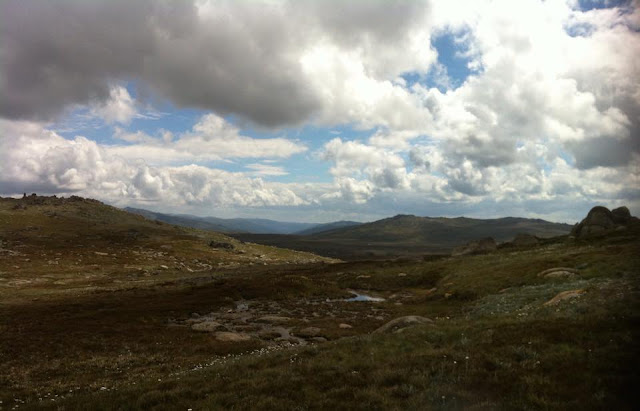 Brumbies are wild, undomesticated, feral horses that are not native to Australia but which have become closely identified with the Australian landscape. You only have to recall the popularity of the movie The Man From Snowy River and the opening ceremony of the Sydney 2000 Olympic Games to understand this affinity.

The Crackenback River referred to in the book is now known as the Thredbo River.


Down by the Crackenback the wattles were in flower and the golden balls fell on to his back, stuck to his mane. Under foot were the little puce Black-eyed Susans. The Bitter Pea scrub was flowering, brown and gold, nearly shoulder high to a cream stallion. The mountain world was bursting into flower, everything filled with joy in living.


The book reminds me in some ways of the original story of Bambi, partly because of the style of the writing and partly the manner in which both authors depicted the animals they wrote about. The main difference between the two is that the animals in Bambi were helpless before the threat man posed, whereas the stallions in The Silver Brumby were wild, could often hold their own, and sometimes injured their pursuers. They were not hunted and killed for sport like the deer in Bambi, but admired for their strength and agility and prized for their potential if caught and trained.


Although the animals in The Silver Brumby talk to each other, it doesn't make the story less real. The animals are true to their natures; the narrative never feels false or unbelievable. The communication between the animals gives insight into how they respond in different situations and helps the reader to understand their actions and have some empathy for them.

When Elyne Mitchell published the first book in her Brumby series in 1958, there was very little Australian content to be found in children's literature. Already an established writer, she wrote this series for her daughter, Indi, to whom the book is dedicated. Below is a quote from an article written about the author:


Towong Hill was isolated and lacked access to libraries, and Elyne was not happy with the reading matter available for her daughter, especially books, with a lack of Australian content. So she wrote The Silver Brumby using the mountains and brumbies as her setting and characters and Indi at age ten was after all, ‘crazy about ponies.’ It started off as a short story but soon Indi was ‘waiting at the typewriter for the next instalment.’

Since then, these stories of the wild brumbies of the Australian High Country have been loved by readers of all ages and have been translated into eight languages.

The Silver Brumby would suit a confident reader around the age of about 10 years and would be a wonderful read aloud from around age 7. It has a good balance of descriptive writing wrapped up in an exciting adventure which keeps you wondering and hoping Thowra will come through all the danger and obstacles he encounters.
The edition below was published to celebrate the centenary of Elyne Mitchell's birth and contains the first four titles in the series - The Silver Brumby, Silver Brumby's Daughter, Silver Brumbies of the South, and Silver Brumby Kingdom. 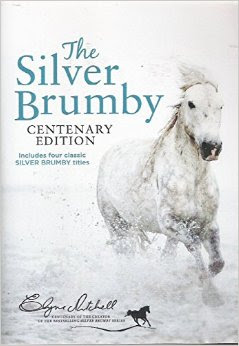 Some information on the Australian brumby here

The Silver Brumby is very popular in our house, and the whole family have enjoyed listening to the audiobook versions of the first three books read by Caroline Lee.

Hi Angela, I just had a look at Bookdepository & saw the audios there. Looks like Bolinda Publishing has a number of good audio titles - I hadn't heard of them until you mentioned it.

I love how you've included quotes with the photos of the Snowy Mountains with your post - it's such a beautiful area of our country.

I have never read The Silver Brumby - I wasn't into horse books as a kid. Although the gorgeous anniversary edition almost tempted me recently!

Thanks for joining in AusReadingMonth :-)

Just so you know, Audible also have short samples of the Bolinda Sliver Brumby Audiobook Series (so you can see if you like the sound of the narrator) here: http://www.audible.com.au/pd/Children/The-Silver-Brumby-Audiobook/B00FOBJZPG

Oh, my girls are gonna love this suggestion!!!!

Oh my! This sounds like something my 12yo daughter would LOVE! She is a horse fanatic! Thank you!

I read these as a child and aloud to all my boys when they were younger. My 13 year old has decided to read them to himself in the last week. I will never forget the occasion when we saw a brumby as we drove from Victoria to Thredbo. The books came alive to us.

I was never into horse books either, Brona, but I love her descriptions of the Snowies.

Well that will keep her occupied for a while if she gets her hands on all 13 in the series!

It's great when that happens. We felt the same way about one of C.K. Thompson's books when we saw a wedge-tailed eagle on a trip to S.A

It will be a good way to 'see' a bit of Australia.

I always loved the wild brumbies after watching The Man from Snowy River. It was one of my favorites and I still own the soundtrack on CD from my teenage years. I'm now 40! I didn't realize the Australian mountains were called Alps like in Austria. At first I wondered if it was a mistake. My grandmother used to tell me that packages sent to Austria would sometimes end up in Australia, because the postal service wasn't paying attention or didn't know the difference! Her husband was Austrian. Visiting from Tina's Booknificent Thursdays! Here's my weekend linky on Amanda's Books and More:
http://abooksandmore.blogspot.co.za/2015/11/from-failure-to-bright-future.html

Yes, they are called the Alps but the highest point is 2228 metres (7310 ft) so don't really compare to the Austrian Alps! My New Zealander husband scoffs at the idea that we have 'mountains' in Australia. I have had to wait a long time for some overseas packages at times - I wonder if they went via Austria??

Beautiful pictures. Thank you for the book suggestion!

Oh my goodness! How have I lived this long and never heard of this series??? (Or the Australian Alps??) I'm a little bit mortified on both counts. My girls are going to be so excited when I pull out this surprise when we study Australia in a few months. I can hardly wait!!! Thanks so much for sharing this wonderful review at Booknificent Thursday this week!
Tina

I would have loved this series when I was young. Reminds me of "Misty of Chincoteague" by Marguerite Henry. When I got a horse of my own I named her Misty, and the next one after that (I got when I was in my 40s). The book had that much of an impression on me. - Margy