Handicrafting is something that has aways given me great satisfaction. In the busyness of bringing up a large family, I always tried to have something I could put my hands to, if only for a few minutes at a time. So much of my day was taken up with doing work that left no visible evidence at the end of the it. Working on a creative project over a period of time produced something tangible and very satisfying.
The world our children are growing up in is the world of the instant, the quick fix. I made a list one time of everything I could think of that could be made instantly. It was significantly long but 'handicrafts' wasn't on it.
As with many other things, learning and aquiring certain skills is so much easier in childhood. When  my older children finished homeschooling and started studying and then working, they had less time for other things. Handicrafts were one of those things that seldom got a look in but I know the skills remain and that they will return to them later on. I used to weave but I haven't set up my loom since my eldest was born. But the knowledge is still there and I'll get back to it again. In the meantime I've developed other skills that are easier to just pick up and do as I have time - quilting and patchwork at present. I started a quilt for a daughter two years ago and I'm still working on it but I know it will be something she will treasure.
This article makes an interesting point on passive entertainment, virtual experience and the lack of true creativity: Handicraft: The Ancient Tradition of Creating Things with Your Hands


Don't despise the day of small beginnings (Zechariah 4:10)...how often have I said that to myself?
Young children may not produce an heirloom but they are aquiring skills and honing their hands and can take pleasure & pride in their work.
Salt Dough & Origami have been all the rage at our place lately. We haven't had heirloom quality productions...yet...but I have always loved seeing my chidren busy with their hands, losing track of time and absorbed in what they are doing.

Moozle just had a birthday and she scored oodles of lovely paper and has been making dresses...
I thought these were really cute. They make pretty gift cards - with some double-sided tape on the back to hold them in place on various coloured background paper.

The dresses below were significantly larger & made with thicker paper to be strung together & used for bunting... 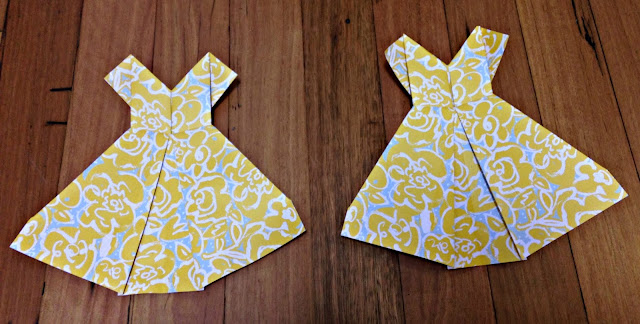 This video shows how they are done:

Salt Dough is a great handicraft for all ages and a good option if you have young boys. We were introduced to salt dough after I found a book when browsing in the craft section of the library & was really surprised at how creative it can be. 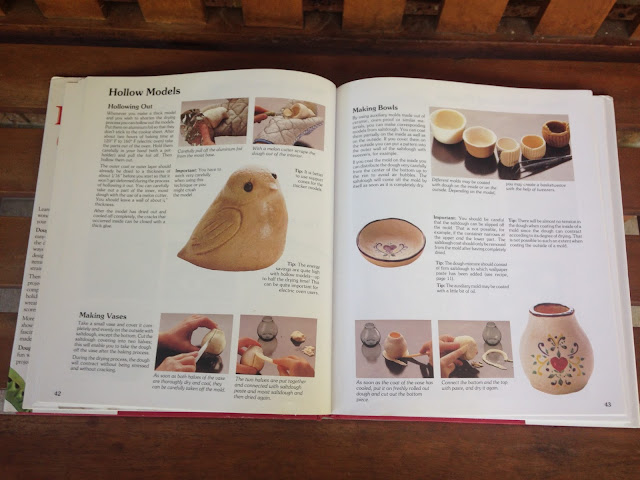 Later I found Dough Crafts by Isolde Kiskalt at a secondhand book sale which has been helpful to have on hand for ideas. Salt Dough is cheap to make - you can start with just salt & flour, some kitchen implements & away you go. We bake or air dry the dough & decorate with water colours (or just leave it plain) after it has dried & cooled. Then it may be varnished which helps longevity and protects the salt dough model against humidity. 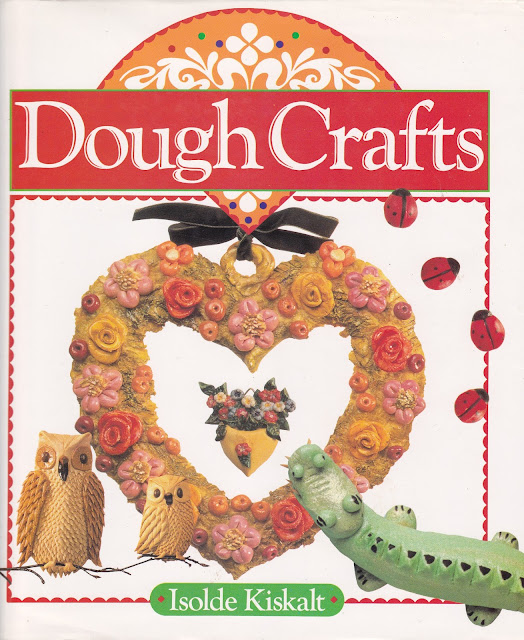 Before & after with the model painted... 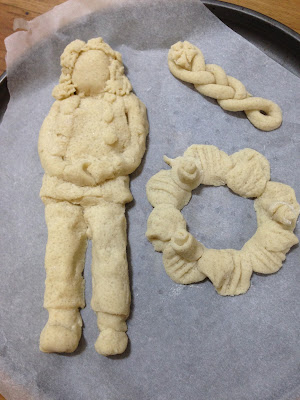 Snipping with scissors gave the echidna (modelled off a hedgehog) his spines. The snout isn't quite long enough for an echidna but I thought she did a good job with the scissors. 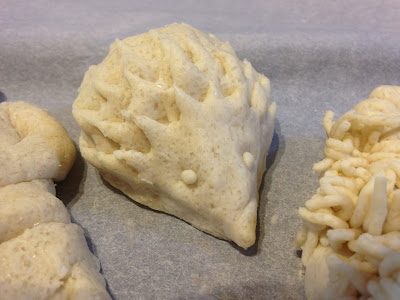 Coffee beans were suggested for the eyes but we didn't have any. Some kitchen utensils that are very useful are: a garlic press (good for making hair), a sieve, scissors, skewers (for patterns on the dough but also to test if the dough is baked properly). 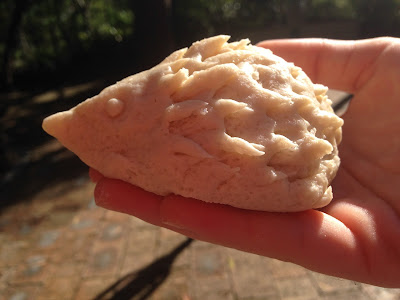 Mix the ingredients together & knead thoroughly - an electric mixer or food processor will give the best results.
The dough dries out very quickly so cover it up when not in use.

Salt dough may be air dried but it takes a while, depending on the thickness of the model. The dough will take twice as long to dry in an electric oven compared to a gas oven (microwaving isn't suitable).
The dough will crack if it's dried too quickly.

The highest reward for a person's toil is not what they get for it, but what they become by it.

When love and skill work together, expect a masterpiece.
John Ruskin (1819-1900)


Update: July 2016 - this is Moozle's latest (ongoing) project using the abundance of leftover material I've used on different projects. It's fairly slow work but she's been doing it while I read aloud:

I love the origami dresses Carol! My dd and I watched the video...who thinks of this stuff!!

Thanks for sharing,
Melissa

That's what I often think too, Melissa! My dd had me sit down & make one & it's quite detailed - one wrong fold & it won't happen. I wondered how someone came up with the idea & the steps involved.

My girls are going to love those paper dresses! Thanks for sharing!

You're welcome. There are so many great & original ideas for practicing origami. Hope you & your girls have fun.

I love salt dough. We made ornaments with it years ago when I was a little girl.

The echinda is lovely! She did do a wonderful job with the scissors. :-)

I'd like to try making some bowls like the one in the book. I've also seen some fantastic ideas for using bread dough & paper mâché - methods I've previously thought were just a bit tacky. It's very inspiring to see what some people do with very ordinary beginnings.

Some people take it to a whole new level. We've had a few fails mostly due to the models not drying well enough, but our book has instructions on how to even make use of those.

nice idea.. we love it

Sometimes I get in bed at the end of the day and I just lie there thinking I just want to sew something. I imagine the joy of stitching - who knows what. Whilst I was busy all day I didn't actually feel like I made anything. This is an excellent reminder.

I feel a little like that tonight. Ran around most of the afternoon & except for a mountain of washing off the line I don't have any reminder that I've accomplished anything. Must get out my quilting tomorrow.

Hand crafts are something I want to do with our family but it is the thing that always falls away. I am planning to pick one thing and focus on it for a whole month. I like the idea of salt dough. Thanks for the inspiration.

You're welcome Ainsley. You might find the dough dries well in the sun, at least in the dry season, where you are. Have fun :)

Thanks for the ideas. I've never used salt dough but it sounds really good.

Keep it up!! You have done the nice job having provided the latest information. These design looks amazing and adorable. Thank you so much for sharing this post!!
glass beads manufacturers