The Tragedy of the Korosko by Arthur Conan Doyle (1898) 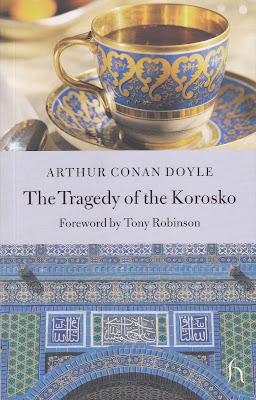 Arthur Conan Doyle was born in Edinburgh in 1859. After finishing school he went on to study medicine and later moved to the south of England to set up a medical practice. It was here that he started to focus on his writing and where he met his future wife, Louise. About nine years after their marriage, the couple moved to Egypt in hopes of overcoming Louise's poor health, but she died of tuberculosis six years later.
While in Egypt, Conan Doyle witnessed first hand the fragility of British rule in the Middle East and the idea for this book was born.

In 1895 the steamer, S.W. Korosko, set out from Shellal, a small village in Upper Egypt, with an assorted group of English, Irish and American tourists on board. Their intention was to travel up the two hundred miles of Nubian Nile, visiting the various points of interest along the way, but during one of their excursions they were kidnapped by a group of Arab dervishes and plunged into a world steeped in seventh century ideas and practice.

And now they were herded in at the base of the Abousir rock, this little group of modern types who had fallen into the rough clutch of the seventh century - for in all save the rifles in their hands there was nothing to distinguish these men from the desert warriors who first carried the crescent flag out of Arabia. The East does not change, and the dervish raiders were not less brave, less cruel, or less fanatical than their forebears.

The Tragedy of the Korosko is an absorbing adventure that, despite being published over a hundred years ago, is uncannily relevant to us in the 21st Century. It has its moments of melodrama, an improbable optimistic ending, and the colonial attitude is downright embarrassing and arrogant at times, but it is historically real. Apart from the cultural and historical aspects, which are fascinating, the author's humour is cleverly scattered throughout and his characters sensitively drawn:

She had never been from home before, and she was now busy upon the self-imposed task of bringing the East up to the standard of Massachusetts. She had hardly landed in Egypt before she realised that the country needed putting to rights, and since the conviction struck her she had been very fully occupied. The saddle-galled donkeys, the starved pariah dogs, the flies round the eyes of the babies, the naked children, the importunate beggars, the ragged, untidy women - they were all challenges to her conscience, and she plunged in bravely at her work of reformation. As she could not speak a word of the language, however, and was unable to make any of the delinquents understand what it was she wanted, her passage up the Nile left the immemorial East very much as she had found it...

His work had become an ingrained habit, and, being a bachelor, he had hardly an interest in life to draw him away from it, so that his soul was being gradually bricked up like the body of a medieval nun. But at last there came this kindly illness, and Nature hustled James Stephens out of his groove, and sent him into the broad world...
At first he resented it deeply. Everything seemed trivial to him compared to his own petty routine. But gradually his eyes were opened, and he began dimly to see that it was his work which was trivial when compared to this wonderful, varied, inexplicable world of which he was so ignorant.

He rode with his back arched and his chin sunk upon his breast, for the old, time-rotted body was worn out, but in his bright, alert eyes there was always a trace of the gallant tenant who lived in the shattered house.

The Hesperus Press copy I have includes an interesting foreword written by Tony Robinson in 2003 in which he recounts an experience he had while making a television film in Egypt. He raises the questions of moral authority and global responsibility that Conan Doyle probed; questions that are still relevant today. My 16 year old son read and enjoyed this book after I did and it triggered an interesting discussion.
It fits into the time period covered in the last chapters of Volume IV of Churchill's History of the English-Speaking Peoples, The Great Democracies. 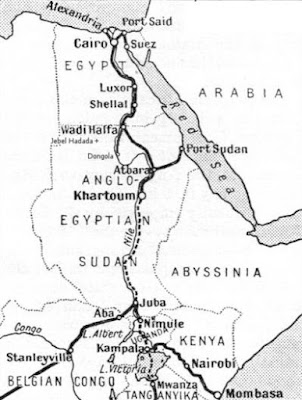 Linking to Back to the 2016 Classics Challenge - Adventure Classic

Labels: 2016 Reading Challenges 50 Classics in 5 Years Authors for Teens Back to the Classic 2016 Books for Teens Islam Literature Teens

Brona said…
I can see why this cover appealed to you - it's so pretty!
And the story sounds quite modern and relevant. Thanks for bringing this one to my attention:-)
27 February 2016 at 16:08

Carol said…
That was what struck me about the book - if you changed some obvious Colonial attitudes & behaviour, it would seem quite modern.
28 February 2016 at 14:32

Major said…
I read this novel in 2014. The best point is that story always moves, Conan Doyle could really write a rip-snorter of a tale (see The Lost World, too). My review is at

Carol said…
I was never really interested in his Sherlock Holmes books, although my kids love them, but I've enjoyed some of his more historical novels. Nearly finished Sir Nigel which is a nother ripper of a tale.
14 March 2016 at 21:47