Back to the Classics - The Five Red Herrings by Dorothy L. Sayers (1931) 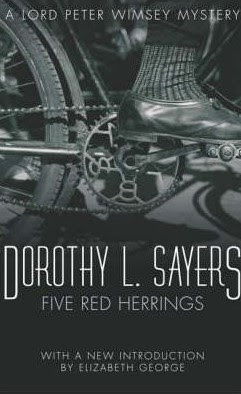 Lord Peter Wimsey, although an Englishman, was well-received in the close-knit fishing and artistic community of Galloway and had passed many a season in the area. One night when he was having a drink at the local pub, a dispute broke out between Campbell and Waters, two of the resident artists, and they came to blows.
Campbell was universally disliked, 'a devil when he's drunk and a lout when he's sober,' and since his arrival in the community there had been nothing but rows and bickering. After the men were forcibly separated, Campbell stormed off in high dudgeon into the night.
The next day he was found dead at the bottom of an outcrop of granite; his body lying face down in the burn and an unfinished painting on a sketching easel on the rock ledge above. There seemed little doubt that Campbell had accidentally fallen as he stepped back to observe his painting. But then Wimsey noticed something everyone else had missed. He declared that it was a case of murder and that it had been committed by an artist.

'...I don't mind betting this is the most popular thing Campbell ever did. Nothing in life became him like the leaving it, eh, what?'

There were six suspects, all of whom detested Campbell and had grievances against him. Five of the suspects were red herrings; one was the killer, and it took all the ingenuity of Wimsey and the local 'pollis' to piece events together and decide who was responsible.

It was a marvellous day in late August, and Wimsey's soul purred within him as he pushed the car along. The road from Kirkcudbright to Newton Stewart is of a varied loveliness hard to surpass, and with a sky full of bright sun and rolling cloud-banks, hedges filled with flowers, a well-made road, a lively engine and the prospect of a good corpse at the end of it, Lord Peter's cup of happiness was full. He was a man who loved simple pleasures.

I relished the setting of The Five Red Herrings - a part of Scotland about 180 km south of my birthplace, and there is quite a bit of Scottish brogue in the dialogue, which I know sometimes causes problems if you're not familiar with the tongue. The BBC audio version is good and is narrated by Patrick Malahide who does a pretty decent Scottish accent, for a sassenach, although two of the police detectives sound almost identical.

Elizabeth George, a mystery writer herself, had this to say about Sayers:

While many detective novelists from the Golden Age of mystery kept their plots pared down to the requisite crime, suspects, clues, and red herrings, Sayers did not limit herself to so limited a canvas in her work. She saw the crime and its ensuing investigation as merely the framework for a much larger story, the skeleton - if you will - upon which she could hang the muscles, organs, blood vessels and physical features of a much larger tale.

George said that Sayer's writing was like a tapestry and this is so true. I've read a number of the Lord Peter Wimsey novels and there is a  richness and attention to detail that you don't usually find in detective fiction. I enjoy her literary allusions, Latin quotations, the intellectual stimulation and the humour woven into her novels.
Speaking of humour, in The Five Red Herrings Wimsey decides to re-enact the crime, having guessed the murderer's identity but having insufficient evidence to make an arrest. The Chief Constable, Sir Maxwell, is chosen to be the corpse and Wimsey plays the murderer.

'Now, corpse, it's time I packed you into the car. I probably did it earlier, but you'd have been so uncomfortable. Come and take up your pose again, and remember you're supposed to be perfectly rigid by now.'

'This may be fun to you,' grumbled Sir Maxwell, 'but it's death to me.'

'Eh!' said Macpherson as Wimsey seized the Chief Constable's cramped and reluctant body and swung it on to the back seat of the Morris, 'but your lordship's wonderful strong for your size.'

'It's just a knack,' said Wimsey, ruthlessly ramming his victim down between the seat and the floor. 'I hope you aren't permanently damaged sir. Can you stick it?' he added, as he pulled on his gloves.
'Carry on,' said the corpse in a muffled voice.

A nice little extra included in the Hodder and Stroughton editions of Sayer's Wimsey novels, (pictured above) but not in the HarperTrophy or Dover copies, is a short and entertaining 'biography of Lord Peter Wimsey, brought up to date...and communicated by his uncle Paul Austin Delagardie.'


Sayer's Lord Peter Wimsey's mystery classics are scheduled as free reads in the Ambleside Online Year 12 curriculum, although we've used them at a younger age after Agatha Christie's novels and the Father Brown series by Chesterton had been read to death.

at July 27, 2016
Email ThisBlogThis!Share to TwitterShare to FacebookShare to Pinterest
Labels: 2016 Reading Challenges, 50 Classics in 5 Years, Ambleside Year 12, Back to the Classic 2016, Books, Classics, Detective, Literature, Scotland, The Classics Club

Brilliant review. I am a fan. I am reading and savoring The Nine Tailors. It's true, she gives you so much. Her humor and her sense of place and time, her attention to detail, are remarkable.
This title you read sounds interesting, and I am glad it was pleasing to your Scottish side -I didn't know that about you until I read your 10 books challenge post.

I can't remember reading The Nine Tailors. We moved to Australia from Scotland when I was 8. My dad had had enough of the wet weather, riding to work in the rain most days.

The Nine Tailors are bells.
My in laws emigrated to Australia for 8 years but returned to Malta.

We still have many relatives in Australia. I would love to visit one day, it's a dream of mine.

It's now hot in Texas, but I prefer this weather to the cold of Madrid. On average, we get to see the sun most days.

I really enjoy the Lord Peter Wimsey mysteries! I read through them all for the first time during my last pregnancy. I'm currently re-reading Busman's Honeymoon and so enjoying how much richness she adds to her stories.

I have read it - the title didn't remind me of bells! You must visit me when your dream comes to pass :)

I tended to rush through a lot of books when all the children were little. I'll have to do some re-reading of her books - I read most of them a number of years ago.

There's not a lot of mysteries that hold up to re-reading, but hers certainly do. Even if I manage to remember who did it, there's still so much to enjoy... and then there's the fun of seeing how she masterfully drops a little hint here, a little clue there to help the astute reader figure it out along with Wimsey.