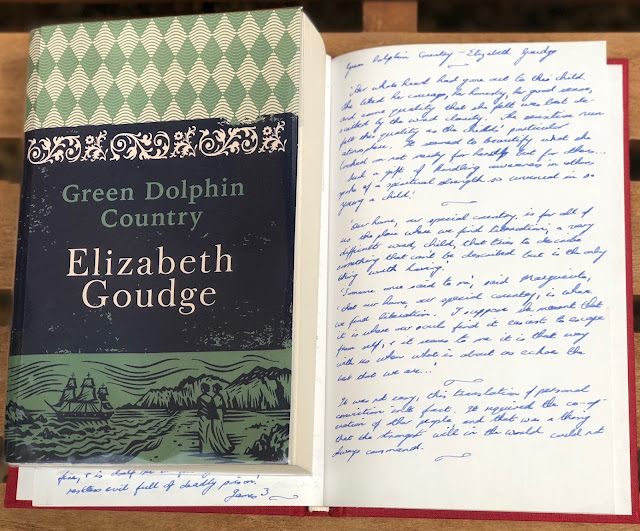 Earlier this year I was introduced to Elizabeth Goudge through her book The Rosemary Tree and after reading that I knew that I’d read more by her. I ordered Green Dolphin Country because a good friend recommended it but I was surprised when it arrived that it contained 743 pages. I don’t usually commit to a book of that length unless it’s a Russian classic or a Norwegian saga because I don’t think there are many authors who have the skill to weave a story over that many pages without losing the plot and the reader.

However, once I’d bought the book I decided to read it and ended up enjoying it very much. Goudge certainly doesn’t write like a Russian novelist or a Norwegian saga writer but she is an expert delineator of character.

Green Dolphin Country is a work of fiction but it was based on an actual event. The story begins on the island of Guernsey in the English Channel where we meet the three main characters. It continues in New Zealand with details of the lives of two of those characters, alternating with scenes from the life of the one left behind. It ends with the meeting of all three again back in Guernsey in their latter years.
The personalities who populate this story are rendered in such a way that they become real. We see how the three main characters develop and change over the course of their lives. Goudge's insights into humanity with its weaknesses and strengths, fears and hopes, is skilful and infused with humour.
To me, this story was in essence a tale of love and disappointment; of choosing to love and acting on that choice when there was no corresponding feeling of love; of kindness and humility, of finding a way to make things work when there seems to be no way.

On the one who always wanted to be in control:

It was no good waiting on fortune. Her favour was inscrutable and uncertain. What one wanted one must get for oneself. A man could use his will like a sword but a woman had mostly to use hers like a shuttle.

...for the first time in her life she had taken her hand off the tiller and was waiting patiently for something beyond herself to take her in charge.

The worst thing about sin was that its punishment could not be borne by the sinner alone. Why did one not realise that before it was too late?

Goudge has a knack of illuminating ordinary things and highlighting hope. One of my favourite passages is this one about the unseen aspects of prayer:

There were days when the impossibility of seeing the result of one’s prayer was disheartening almost to the point of faithlessness. One prayed for those in peril, but though one might seem to hear the beating of wings in the wind the eyes of the body could not see the angel who took the prayer from one’s outstretched hands, held it as a shield between some human creature and the death that it was not yet the will of God should come upon them. One prayed for courage for those who had turned back upon the path, that they might turn again, but one’s own body did not experience the shock of realisation, the reversal, the gathering of strength. One prayed for the faithless but it was not granted to one’s ears to hear the crumbling of the walls and the shouting of the trumpet and the ‘I believe...’

There might be utter humiliation but that’s not the end of the story.

The sort of love he had given her, deliberately created, not drawn irresistibly forth by the loveliness of the beloved, implies no merit in the object of it and was not worth having. No, she had nothing - nothing.

She was too humiliated just at present to dare think that the virtue of humility might one day be her own.

How desperately hard it must have been for him. What a price he must have paid for her salvation! That was what love was - a paying of the price.

This is a very redemptive type of story and I love it for that fact alone.


Linking to Back to the Classics 2018: Classic with a Color in the Title


at November 04, 2018
Email ThisBlogThis!Share to TwitterShare to FacebookShare to Pinterest
Labels: 50 Classics in 5 Years, Asia-Pacific, Back to the Classics 2018, Elizabeth Goudge, Literature, Mother Culture, Reading Europe

" . . .choosing to love and acting on that choice when there was no corresponding feeling of love."

What an incredibly important lesson! One that my 16 year old and I have both been working on from two very different angles.

These days it feels like the shortest books that I read are all over 700 pages :)

After you posted about The Rosemary Tree a while back, I ordered an old copy, and I really enjoyed it. The only problem was that it felt like it ended too soon. So maybe I'll give this one a try, as I like a book I can really get into and spend some time with. Besides, I have enjoyed everything by Elizabeth Goudge I've read so far. Thanks for the review.

Ooo, Carol, your review has make me long to read this book; it's been sitting on my shelf for awhile. It's been the story of my life lately; I start a book, get distracted by another one and then another one until I have too many on-the-go. We'll see what happens with this one .... ;-) Thanks for the reminder! :-)

Hi Brian, I’ve actually just started Anna Karenina and am thoroughly enjoying it. It’s taken me years to get around to reading because it’s so long but I’m finding it hard to put down and seem to be getting through it much quicker than I ever thought I would. 🤔

Laura Jeanne, yes, I was a little dissatisfied with The Rosemary Tree towards the end although I did enjoy it overall but it was the first novel I’d read by Goudge so I didn’t have anything to compare it with. Green Dolphin Country was written 12 years earlier than The Rosemary Tree but the former was much more developed and seemed to have been written by a more experienced Goudge. Maybe she does better with a longer story??

Hi Cleo, I’ve been a bit that way also, although I still manage to read it’s the writing I’ve been finding hard to get time for. Good to see you blogging about the Bible, btw. 🙂

Great review! I was seriously considering reading this title for the 1944 Club but yeah, the length of it (combined with my poor planning) squashed that!

But I still have it on my mental TBR! I generally quite like longer books because the reader (often) really gets to "live" in the world of the book that way sometimes.

The 1944 Club sounds good. I agree with you about long books even though I sometimes hesitate to read them. It doesn’t make sense not to though. Why not read one epic rather than 3 or 4 not epics? 🙂

It's been a long time since I've read this title. I think I need to reread!

I've never heard of this book or the author - I will look into it further. Thanks

I am a huge Goudge fan but am not familiar with this particular title. Thank you for reviewing it. I may have told you before that I think The Dean's Watch is her best work, followed by the Damerosehay trilogy.

Yes! I remember you mentioned these were your favourites. I’ve had a few people say that The Dean’s Watch is one of her best so I think I’m going to read that next. 🙂

I discovered Elizabeth Goudge this year and what a gift!
I was a little put off at first by the length of the book, but it was worth every single page turn.

I only started reading her books this year too, Michele 🙂

Carol, I came back to this post to tell you that I am almost done reading Green Dolphin Country, and I'm so grateful to you for posting about it because it's such a wonderful book. What lessons it holds for us on loving and persevering even when it's hard! I think that Marianne, Marguerite and William will stay with me always, now - I'll never forget them.

Oh, I'm so pleased you enjoyed it! Books can be so personal and depend much on when we read them too, so I always wonder if others will find the pleasure in something I've enjoyed.