The Keys of the Kingdom by A.J. Cronin

Perhaps the greatest strain is thrown upon our moral vision by the spectacle of another's success.
The dazzle hurts us. 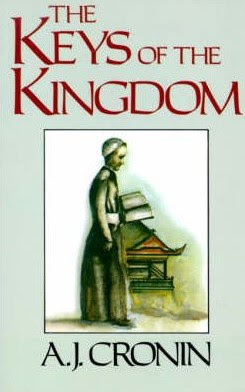 The Keys of the Kingdom is the moving story of the spiritual struggle of a young priest, Father Francis Chisholm. Often at loggerheads with the hierarchy of the church, Francis was unconventional in many ways, although fervent in his faith and its outworking.
Set in both Scotland and a remote region of China between about 1870 and 1938, the story follows his childhood and the events leading to his decision to enter the priesthood. It portrays his hard won successes and his great disappointments; his individualistic tendencies that sometimes won him no friends, and his humility that opened unlikely hearts and doors.
This was a beautiful work of fiction that reached into my heart.
Francis was overlooked and misunderstood throughout his life. Those who had to work closely with him often despised him at the first. One such person was the proud Mother Maria-Veronica who had decided to leave the Chinese mission until Canon Anselm Mealey, a boyhood companion of Francis who 'had made a fine thing of his life,' came to inspect the mission.

After Anselm had left, Father Chisholm was meditating amongst the debris of his church which had been destroyed by flooding just before Anselm's visit.

There was little courage in him now. These last two weeks, the perpetual effort to sustain his visitor's patronizing tone, had left him void. Yet perhaps Anselm was justified. Was he not a failure, in God's sight and in man's? He had done so little. And that little, so laboured and inadequate, was almost undone. How was he to proceed? A weary hopelessness of spirit took hold of him.

As Francis was thinking thus, Mother Mary-Veronica came out to him:

"I have something to say to you...
I am most bitterly and grievously sorry for my conduct towards you. From our first meeting I behaved shamefully, sinfully. The devil of pride was in me...
I have known now for weeks that wanted to come to you...to tell you...but my pride, my stubborn malice restrained me. These last ten days, in my heart, I have wept for you...the slights and humiliations you have endured from that gross and worldly priest, who is unworthy to tie your shoe. Father, I hate myself - forgive me, forgive me..."

"So now you will not leave the mission?"

"No, no..." Her heart was breaking. "If you will let me stay. I have never known anyone whom I wished so much to serve...Yours is the best...the finest spirit I have ever known."

The Keys of the Kingdom shows what really matters in the long run. Francis had asked God to judge him less by his deeds than by his intention and his intentions had always been honourable.
Lovely, lovely book.


The Keys of the Kingdom by A.J. Cronin is my selection for the Back to the Classics 2017 Challenge: 20th Century Classic

Labels: 20th Century 50 Classics in 5 Years Asia-Pacific Back to the Classics 2017 Literature

Cleo said…
Wow, this definitely sounds like it's worth reading. It reminds me a little of A Diary of a Country Priest. I'll keep my eyes open at my favourite used book stores. :-)
19 January 2017 at 17:18

Aflyonmyhomeschoolwall said…
I love your book reviews--they suck me in and make me so hungry to read. Thank you for this one.
19 January 2017 at 23:31

Gently Mad said…
I can't find the comments section so I'm commenting as a reply to cleo :)

I did not realize that A.J. Cronin wrote such books. Didn't he also write "A Song of Sixpence?" That was also a good book.

I think they may have made a movie out of this with Gregory Peck as the priest. It was well done. And unapologetically Christian. They don't make movies like that anymore.

Carol said…
Cleo, I had a look at some reviews of that book. It does sound like it has some similarities. Keys of the K ends on a more positive note from what I gather.
20 January 2017 at 21:20

Carol said…
Sharon - I've had a couple of issues with Blogger lately & also had the same experience when I tried to comment on another blog recently. Cronin was a prolific writer & yes, he did write that one. The Citadel is one of his better known books and Dr Findlay's Casebook was a TV drama based on the book of the same name. I vaguely remember my grannie in Scotland liking it.
20 January 2017 at 21:24

Sherry said…
We could all use a few lessons in humility and humble service these days. Thanks for the review.
21 January 2017 at 16:45

hopeinbrazil said…
I read this many years ago and only remember the devastating sadness of it all. Did you feel that way while reading?
21 January 2017 at 22:34

Carol said…
It did feel sad, but not hopeless. A couple of the most moving sections were really redemptive and some previously antagonistic characters had their eyes open to the true character of the priest who was a bit of a larrikin, not a pushover or a marble saint.
23 January 2017 at 20:26

Anonymous said…
This is a fabulous reading choice for the challenge. I am adding it to my TBR and have sent a request for our library to carry it on Camellia.
26 January 2017 at 20:24

Joseph said…
It sounds interesting and hmmm....calming perhaps? Calming would not describe my choice for a 20th Century Classic: http://100greatestnovelsofalltimequest.blogspot.com/2017/04/appointment-in-samarra-by-john-ohara-80.html
1 May 2017 at 01:33