Classical Academic Press - Review & Give Away! French for Children, Primer B

At the beginning of last year my nearly 11 year old daughter started using French for Children, Primer A (FFCA) published by Classical Academic Press after a number of years of informal French study. It proved to be timely for her to commence learning this language using a more formal approach and we were both very happy with the material. I wrote about our experience here.

French for Children Primer B (FFCB) was published late last year and Classical Academic Press kindly sent me a copy for review purposes. I really like this Curriculum and so my review is unabashedly positive, but it is my honest opinion.
My now just turned 12 year old daughter started using FFCB in December last year and it followed on seamlessly from their previous text. It is recommended for Grades 5 to 7 and follows the same style and format as FFCA with a couple of new additions. 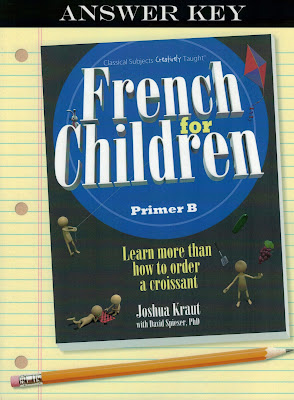 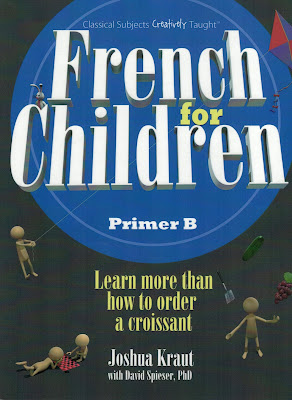 17 weekly chapters, including 3 review chapters and an end-of-book review
258 pages
6 DVDs
1 CD - contains chants, vocabulary, grammar, dialogues, Say it Aloud exercises and dictation exercises. (Also available as a downloadable audio file)
There are schedules for covering the curriculum in either half a year or a full academic year of 30 weeks. 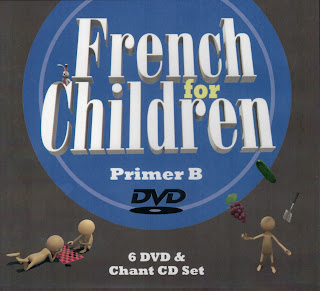 •    an alphabetical glossary or 'mini dictionary' of all vocabulary words from Primers A & B
•    Vocabulary also listed by chapter from which it first appeared in both Primers (12 pages)
•    Appendices condensed and organised into charts: e.g. prepositions, verbs & verb conjugations, past participles

Previous concepts learned throughout FFCA are referred to briefly before they are gone into more thoroughly e.g. FFCA covers the present tense and FFCB reviews this and then introduces the future tense in Chapter 9 and the past tense in Chapter 11.
FFCA teaches Irregular verbs, Part 1 and FFCB continues with part 2 & 3.

If you were coming from a different curriculum and were thinking of starting with FFCB instead of FFCA, your child should be familiar with the following concepts first:

The DVD's by Joshua Kraut are excellent and contain some built-in review of the content covered in FFCA but they mostly concentrate on new material.
Speaking of DVD's, some kids (notably mine) are put off by the tone, accent or attitude of some speakers ("Do we have to listen to him?") but Mr Kraut gets the thumbs up from my lot. He is easy to listen to, has a sense of humour without being too obvious about it, and is generally very pleasant.
Below is the complete video for Chapter 1:

As I mentioned in my review of FFCA, the only thing I'd add to this curriculum would be listening to French folksongs. I have a YouTube playlist of a variety of folksongs here that we've used previously and a newer playlist here of the songs we're doing this year.

Classical Academic Press is giving away two French for Children: Primer B bundles for USA residents. Enter via Rafflecopter at Expanding Wisdom and There's No place Like Home!

Giveaways end at midnight on February 14th and February 22nd. Winners will be contacted by email. Winners that do not respond by the deadline given in the winners’ email will be replaced by random drawing.

Sounds like a good program. I used Rosetta Stone with my son. I still use it, not that it helped when I visited France this past Christmas. I am going to send the link to your blog to my sister who is beginning to homeschool her little girl and looking for resources.

It's been a great programme, Sharon. I used Rosetta with my older kids but CAP has been a much better experience and more comprehensive & just generally a good fit for us. If your sister would like some help, she can email me on the link at the top right.

My kids and I are just finishing Level A and I have recommended it to many. So good! Can't wait to try B.

I love this program! We supllement it by renting books from lespetitslivres.com :-)

Hi Erin, I was very impressed with Level A also.

That looks like a great resource. I had a look but they don't ship outside the USA but I thought I'd have a look at what they offer and see if I can pick it up some of their titles from Bookdepository or secondhand. Thanks for the link!

Hi Sandy, that was my problem with some other French resources we used previously - they weren't solid & comprehensive enough.