The Franchise Affair by Josephine Tey (1948)


Josephine Tey has just shot to the top of the list of my favourite authors. Inspector Alan Grant of Scotland Yard was already up there as the most humane and likeable literary detective of my reading to date, but although he does play a (very minor) role in this novel, it is an unqualified, unlikely, middle-aged conservative bachelor by the name of Robert Blair who does the detecting in this mystery.


The Franchise Affair by Josephine Tey 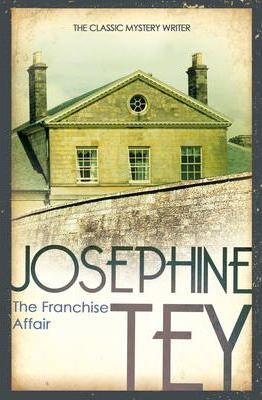 Robert Blair, solicitor of the business Blair, Hayward, & Bennet, has his tea-tray brought to him at exactly 3:50pm every working day, with a continuity that has remained unchanged for as long as he can remember. This had never bothered him - until recently. On this particular afternoon, a totally foreign thought entered his head, unbidden, as he looked at the empty tea-tray on his desk:


'This is all you are ever going to have.'

This thought was accompanied by a sudden constricting sensation in his chest. Both the thought and the feeling were extremely puzzling to him as he was quite happy with his life and had no wish to change anything.
He was getting ready to go home that evening when the phone rang and a woman by the name of Marion Sharpe asked if he would help her with some legal backing. When the woman told him her circumstances and that Scotland Yard was already involved, he tried to pass her on to someone else who dealt with criminal cases as he had no experience in this area at all.

'I don't want a criminal lawyer. I want a friend...you don't need a training in crime for that, do you?'
'No, but you would be much better served by a firm who were used to police cases. A firm that - 'What you are trying to tell me is that this is not 'your cup of tea?; that's it, isn't it?'
'No, if course not, Robert said hastily. 'I quite honestly feel that you would be wiser -'

'You know what I feel like?' she broke in. 'I feel like someone drowning in a river because she can't drag herself up the bank, and instead of giving me a hand you point out that the other bank is much better to crawl out on.'

Miss Marion Sharpe lived with her elderly, outspoken mother (imagine Maggie Smith of Downtown Abbey in reduced circumstances) in a house known as The Franchise that they inherited about three or four years previously. Blair made his way to the house after agreeing to 'watch out for Miss Sharpe's interests' while Scotland Yard was on the premises, with the understanding that he was not obliged to assist her any further if he decided he did not want to be involved.
The detectives from Scotland Yard had arrived that day with Betty Kane, a teenaged girl who said that she had been picked up in a car and detained by two women who wanted to make a servant of her; that they kept her locked up when she refused, and had beaten and starved her before she eventually escaped. The girl described The Franchise and the women in great detail and bore signs of having been beaten. The Sharpes denied the charges and insisted that they had never laid eyes on the girl before.

The Franchise Affair was a splendid mystery and an irresistible read. The characters were wonderfully drawn, the plot original, and the ending unguessable. Tey's psychological observations are first class, especially those concerning the criminal mind:

'Your true criminal...has two unvarying characteristics, and it is these two characteristics that make him a criminal. Monstrous vanity and colossal selfishness...
The criminal is a person who makes the satisfaction of his own immediate personal wants the mainspring of his actions. You can't cure him of his egotism, but you can  make the indulgence of it not worth his while.'

My two favourite characters were Robert Blair - self-deprecating and dependable:

'It's the Irish,' Robert said, gloomily. 'It comes as natural to them as breathing. Us poor Saxons plod along our brutish ways and wonder how they do it.'

'This is Mr. Blair, of Blair, Hayward, and Bennet - the firm who have that lovely house at the top of the High Street.”
As Robert bowed the old woman fixed him with her seagull’s eye.
'Needs re-tiling,' she said.
It did, but it was not the greeting he had expected.
It comforted him a little that her greeting to Grant was even more unorthodox. Far from being impressed or agitated by the presence of Scotland Yard in her drawing-room of a spring afternoon, she merely said in her dry voice: 'You should not be sitting in that chair; you are much too heavy for it.'

For his money, old Mrs Sharpe was quite capable of beating seven different people between breakfast and lunch, any day of the week.

All in all, an original, stimulating and satisfying read. But set aside some time to lose yourself in Tey's masterful writing. It's just so hard to put this book down once you start.
278 pages.

The book sounds very good. The plot sounds so interesting. Unconventional detectives make mysteries very appealing to me.
21 October 2017 at 02:03

Amy Marie said…
This sounds WONDERFUL! I'm SO drowning right now in books and kind of uninspired by them. When the school term starts I have a hard time reading anything deep/heavier/or long. LOL! Maybe I should try this one! Thanks, Carol.
21 October 2017 at 02:52

Carol said…
It's a bit like reading Dorothy Sayers, although the two authors are very different. They are intelligent but accessible & I feel more educated after reading them, but don't feel the weight of ploughing through a heavier type of book. Hope that makes sense! In other words, I think you'd like her writing!
22 October 2017 at 12:59

hopeinbrazil said…
This was my first Tey novel and it definitely got me hooked. Lovely!
22 October 2017 at 19:31

Ruthiella said…
Nice review! A satisfying mystery can really hit the spot sometimes, particularly when they aren't so long.

I recently binged by re-reading some Agatha Christie (The ABC Murders and Death on the Nile) a couple of weeks ago. But I own (I think) all of Tey's books. I should have tried a new title from her instead perhaps.
24 October 2017 at 07:22

Carol said…
It took me a long time to get to Christie. I was put off by one of her books & didn't get around to trying any others for years. So I'm behind with her books.
As for Tey - I've had a binge in the past month & thoroughly enjoyed three of her books so I'll leave it there for a while, I think.
24 October 2017 at 16:20

Sharon Wilfong said…
This is one of my favorite Teys. In fact I think it may be my favorite. It made a lot of social commentaries about newspapers (the media has not changed much has it?) or how easily prejudiced humans can become against each other.

This story kept me guessing to the very end and I must confess I rather enjoyed the fate of the guilty person.
30 October 2017 at 14:30