Why We Use Old Books for Science


A common charge against Charlotte Mason educators is that we use too many old books. When it comes to teaching science, this objection is even more vehement. How can you teach science using books that were written ten, twenty, thirty or worse still, over a hundred years ago?
Yes, we do tend to use older books but that's not because older books are intrinsically better than more modern titles. There are plenty of dud older books that we'd never use for the good reason that they aren't well-written. The reason we'd choose an older book over a more recent is because it has a literary approach, i.e. it presents facts that are clothed in literary language.
More and more, education has become utilitarian in its approach, and this is reflected in the teaching of science and the content of the books that are used. David Hicks made this observation:

'...as science took a technological turn and as education began preparing students for work rather than for leisure, for the factory rather than for the parlor, the school itself came to resemble the factory, losing its idiosyncratic, intimate, and moral character...
In its utilitarian haste, the state often peddles preparation for the practical life to our young as the glittering door to the life of pleasure; but by encouraging this selfish approach to learning, the state sows a bitter fruit against that day when the community depends on its younger members to perform charitable acts and to consider arguments above selfish interests.'

Norms & Nobility by David Hicks
When a book is too direct and factual there's the possibility that the student may not appropriate the material.
I've thought about this not only in relation to my children but also to my own reading. Some thoughts on uniting the literary & the scientific here.

Of course some things will have changed from when a science book was first written, but we could say that about a science text that was written a year ago. There are ways to bring the knowledge up to date without too much trouble while still giving your student the foundational concepts padded out in a literary medium. YouTube videos are one way that's worked well for us. The chapter from the book is read first and then an appropriate video is shown after that.
We take care that:

Some of the science books I've been using this year for my 13 year old daughter are in the 'old' category. Some are more modern, but they are all good. The first three book below are scheduled for Year 7 (Form III) at AmblesideOnline.


Notebook page for The Life of the Spider 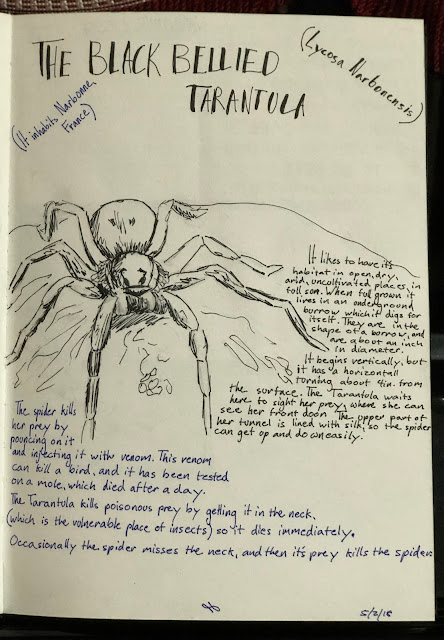 These two books by Fabre are my daughter's favourites. Interestingly, Fabre was not only a scientist but a poet (see a short bio here). Charlotte Mason said of French scientists that, 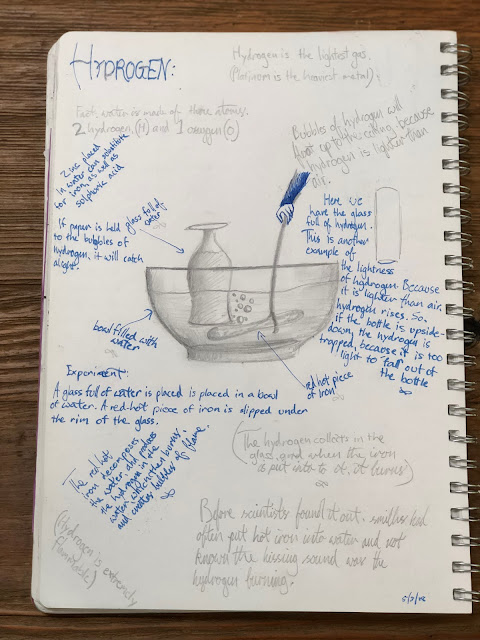 I've used some of the University of Nottingham's Periodic Table of the Elements to not only bring some of the concepts in The Wonder Book of Chemistry (and other books we've used in the past couple of years) up to date but also to see demonstrations of science experiments that we wouldn't be able to perform safely at home.

The BBC's Wild Weather series narrated by Richard Hammond have been helpful with Sloane's book which on the surface looks simple enough but contains some difficult topics where a visual or simulated demonstration is helpful.

Architecture Shown to the Children by Gladys Wynne (1913) 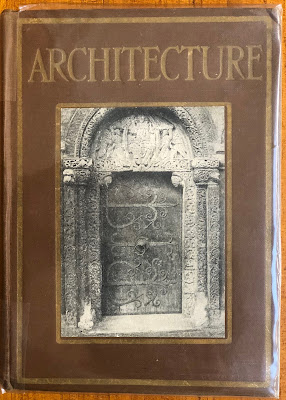 This year we started Architectural Science and Gladys Wynne's book is our primary text. I've added in a couple of other books we have that relate to the science behind architecture such as String, Straightedge, & Shadow: The Story of Geometry by Julia E. Diggins (1965)
Although this would be classified as Mathematics and not Science, we're using it alongside the above book as it relates to Architecture in the Ancient World. The Grand Design DVD's are also an enjoyable addition from time to time. 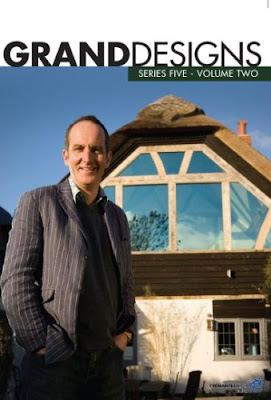 Some examples from Moozle's Architecture Notebook 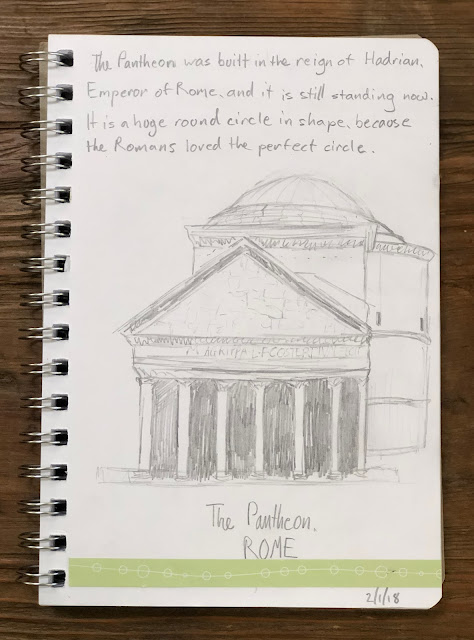 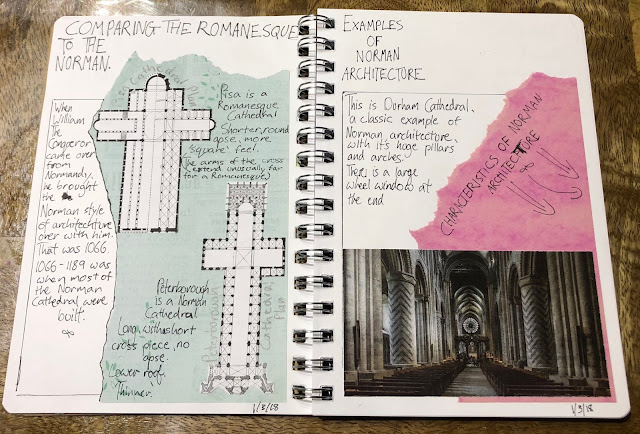 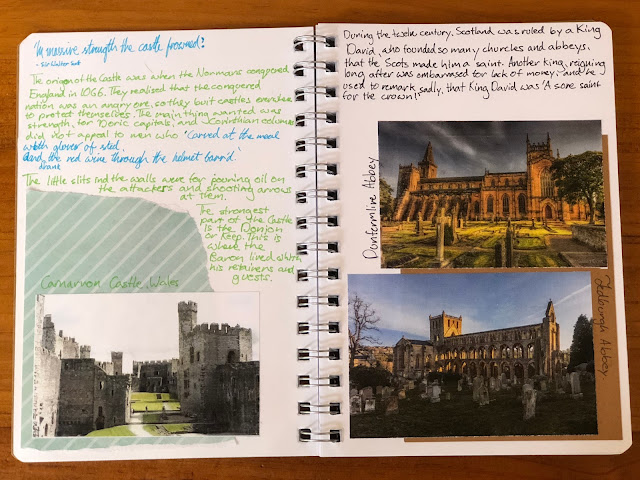 Secrets of the Universe by Paul Fleisher - this was originally published in 1987 and is out of print but it was re-issued as five separate books in 2002. Moozle is reading this one at present: 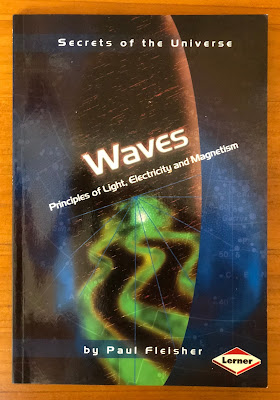 This is a series that a few of my children have enjoyed and learnt quite a lot from. Fleisher has explained the concepts well and included experiments that are do-able in the home situation. This was one Moozle did on light reflection last week: 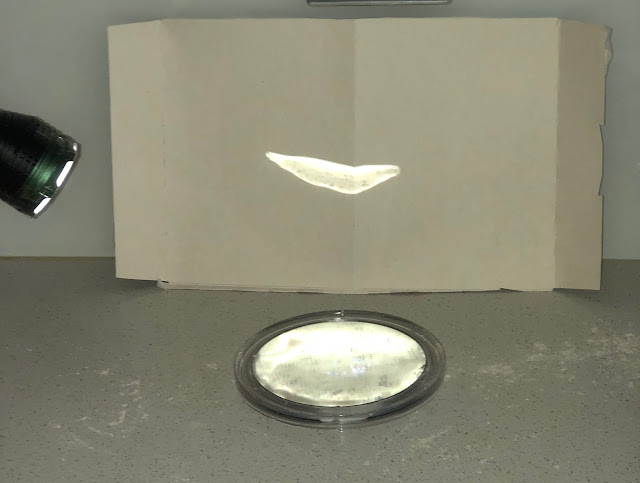 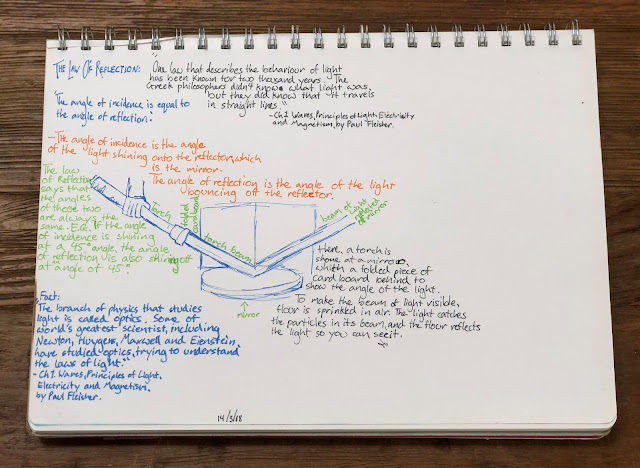 Signs & Seasons by Jay Ryan (2007) is a more recent science publication but I'm supplementing with The Constellations & How to Find Them by Sir William Peck (1942) as he writes from a Southern Hemisphere perspective. 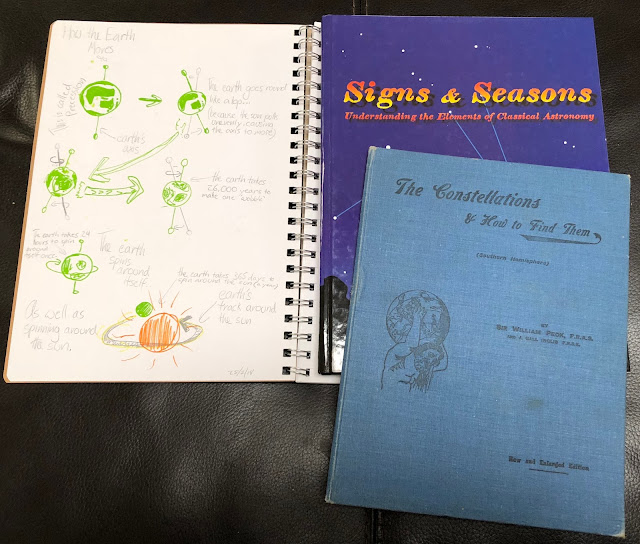 I managed to find a sundial in a local park 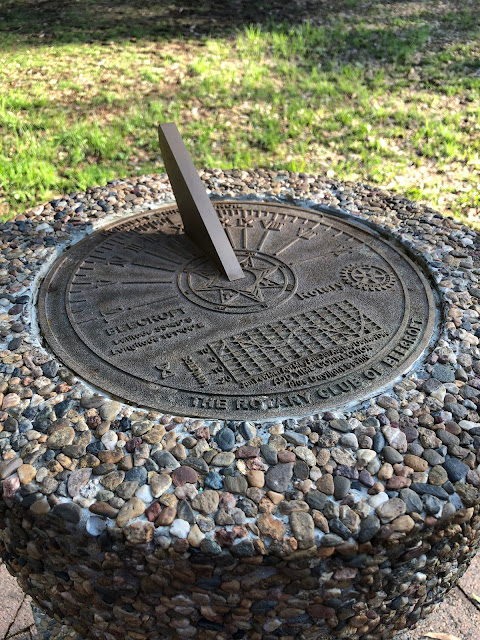 The older books really shine with this subject and just about every book I have related to this field is old. I have up to date field guides for studying birds and plants in our part of the world but reading the writing of earlier naturalists is very inspiring. An interesting article I found about this: What Early 20th Century Nature Study Can Teach Us.
Some of the books I use the most are:

I posted a list of some of these that are available free online here. 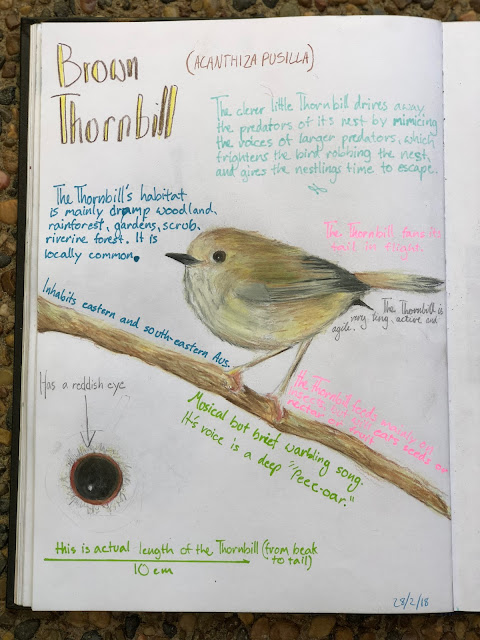 
These are some science titles I've read for my own education, or have used with my older children in the high school years. I've linked to reviews I've written on them or where we've used them in high school.

Uncle Tungsten: Memories of a Chemical Boyhood by Oliver Sacks (2001) - my own reading and one of my sons read it around the age of 16 years.

The Immortal Life of Henrietta Lacks by Rebecca Skloot (2010)

The Double Helix: A Personal Account of the Discovery of the Structure of DNA by James D. Watson (1968)

Mr. Tompkins Inside Himself by George Gamow & Martynas Ycas (1967)

Ruthiella said…
It seems to me that your children are receiving/have received an excellent education in the sciences! Your post makes me want to hit the books, particularly since math an science are my weak points.
20 March 2018 at 07:54

Unknown said…
Carol this is such an excellent example of how to use living books for science. It's such a shame so many good books go out of print. Your daughter's notebooking is lovely.

Carol said…
Ruthiella, Science & geography were absolutely lifeless when I was at school. The only thing I remember from science classes were the boys putting metal rulers into the bunsen burner flame & then trying to stick the ruler on any bare legs that were near by. I've enjoyed reading biographies related to science and seem to be able to learn so much more that way than with a more formal or traditional approach to learning.
20 March 2018 at 17:35

And so interesting. I always knew that older books were better, but I imagined it was b/c they were closer to the truth.
Yet, the literary language is present and so delightful. I would also add that the literary language supports creativity and imagination, which is so necessary for new ideas to flourish -- an area the state discourages or extinguishes with its so-called practical ideas.
21 March 2018 at 04:21

GretchenJoanna said…
The title The Wonder Book of Chemistry and your whole post remind me of what James LeFanu says in his book Why Us?: How Science Rediscovered the Mystery of Ourselves :

'Nowadays, says Le Fanu, science is boring, and “to be a career scientist is to be in a very small hole,” as they are so specialized in their work, and in their education there is nothing like the older biology textbooks that were “full of awe and wonder and astonishment.”'

That is a quote from a blog post https://gretchenjoanna.com/2011/05/09/the-hungry-soul-how-science-disappoints/ in which I mention the author; but I think it was in a Mars Hill Audio interview that he suggests specific titles of older textbooks that support the sense of wonder and the certainty that there is Something Behind the natural world.

It is so sad to think of the millions of students who are missing out on the glories of nature and the cosmos and getting only the paltry fragments of this truncated science in preparation for labor in their "holes." Lord, have mercy!

May the tribes of classical homeschoolers increase, and exult in Creation. God bless you!!

Carol said…
Ruth, 'literary language supports creativity and imagination' Yes! We need our children to be fed with ideas & often we have to use an older book to impart those ideas & a sense of wonder - something many newer books don't provide. If interest is sparked it inspires a child to learn more but if this isn't kindled it will just be information and that doesn't always equate with real learning.
22 March 2018 at 10:26

Carol said…
GretchenJoanna, so lovely to read your comment! The James LeFanu book you mentioned sounds very interesting. Charlotte Mason wrote this and it came to mind after reading your quote:
"Specialisation, the fetish of the end of the last century, is to be deprecated because it is at our peril that we remain too long in any one field of thought. We may not, for example, allow the affairs and interests of daily life to deprive the mind of its proper range of interests and occupations. It is even possible for a person to go into any one of the great fields of thought and to work therein with delight until he become incapable of finding his way into any other such field...
In the great (and ungoverned) age of the Renaissance, the time when great things were done, great pictures painted, great buildings raised, great discoveries made, the same man was a painter, an architect, a goldsmith and a master of much knowledge besides; and all that he did he did well, all that he knew was part of his daily thought and enjoyment."
Thanks for the link to your blog post!
22 March 2018 at 10:43