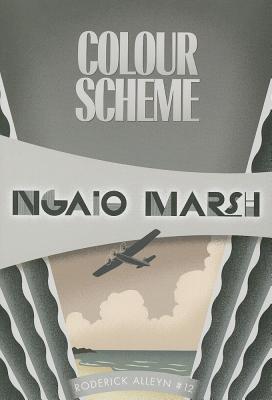 Colour Scheme by Ngaio Marsh (1895-1982) is a WWII crime mystery set in a fictional spot on the North Island of New Zealand similar to the geothermal area of Rotorua with its distinctive sulphurous odour.
Colonel Edward Claire, his wife, and their two adult children, are incompetently running the mud bath resort. Mrs Claire’s brother, James Ackrington, a crusty and disagreeable physician, joins them upon his retirement. Suspicious about the behaviour of one of the resort’s residents in relation to the torpedoing of the S.S Hippolyte off the New Zealand coast, Ackrington writes to Chief Inspector Roderick Allen who had been sent to NZ to investigate the incident.

Into this situation comes Mr Gaunt, a celebrated Shakespearian actor looking for some relief from his bodily ills, accompanied by his secretary, Dikon Bell and Cockney servant, Alfred Colly.
However, everyone comes under suspicion when a man who is making himself unpleasant generally goes missing.
Did he fall accidentally into the geothermal mud pool? Was he an enemy spy? Who would want to kill him? 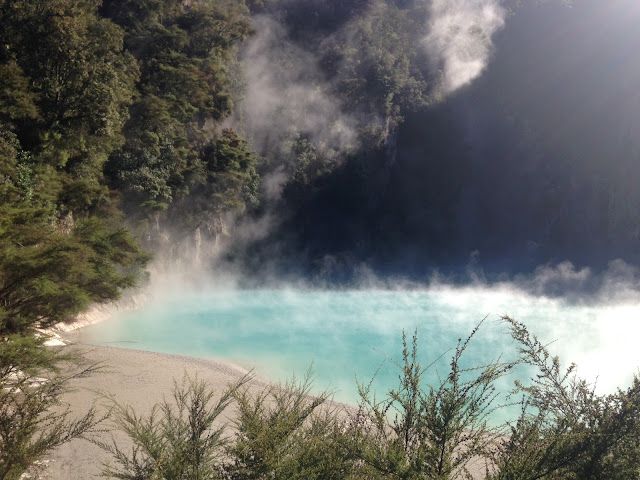 ‘“This War is changing the values of my generation. There are all sorts of things that we have thought funny that we shall never think funny again.” For perhaps the first time he contemplated coldly and deliberately a possible invasion of New Zealand.’

The backdrop of the lush Northland vegetation and the bubbling thermal pools is an unusual setting especially for a book set during WWII. The interaction between the various characters and the local Maoris, their beliefs and veneration of certain artefacts, is what you’d expect it to be considering the time period. 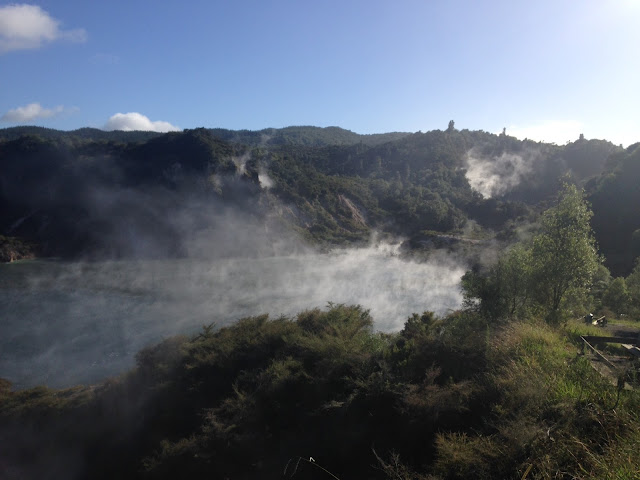 'The Maori people are a kindly and easy-going race. In temperament they are so vivid a mixture of Scottish Highlander and Irishman that to many observers the resemblance seems more than fortuitous.'

'The natives of this country have been ruined by their own inertia and the criminal imbecility of the white population. We sent missionaries to stop them eating each other and bribed them with bad whisky to give us their land. We cured them of their own perfectly good communistic system, and taught them how to loaf on government support. We took away their chiefs and gave them trade-union secretaries. And for mating customs that agreed very well with them, we substituted, wth a sanctimonious grimace, disease and holy matrimony."'

This was a light read with quite a bit of family altercations, banter and humour scattered around. I thought Ngaio Marsh had a clever resolution of the mystery. I certainly didn’t expect it!
There was also a nicely handled romance between Dikon Bell and Barbara, Colonel Claire’s daughter.

'Unable to compete with the few neighbouring families whom her parents considered “suitable,” and prevented by a hundred reservations and prejudices from forming friendships with the “unsuitable,” (Barbara) had ended by forming no friendships at all. Occasionally she would be asked to some local festivity, but her clothes were all wrong, her face unpainted, and her manner nervous and uneven. She alarmed the young men with her gusts of frightened laughter and her too eager attentiveness. If her shyness had taken any other form she might have found someone to befriend her, but as it was she hovered on the outside of every group, making her hostess uneasy or irritable, refusing to recognize the rising misery of her own loneliness. She was happier when she was no longer invited and settled down to her course of emotional starvation...'

Something I learned from this book...habeas corpus is Latin for ‘you must have the body.’
I thought this meant the victim’s body but it refers to the body of the accused: 'a writ requiring a person under arrest to be brought before a judge or into court, especially to secure the person's release unless lawful grounds are shown for their detention.'

'Police investigation...is not a matter of equally balanced motives, tortuous elaborations, and a final revelation in the course of which the investigator’s threat hangs like an ignis fatuous over first one and then another of the artificially assembled suspects. It is rather the slow amassment of facts sufficient to justify the arrest of someone who has been more or less suspect from the moment the crime was discovered.' 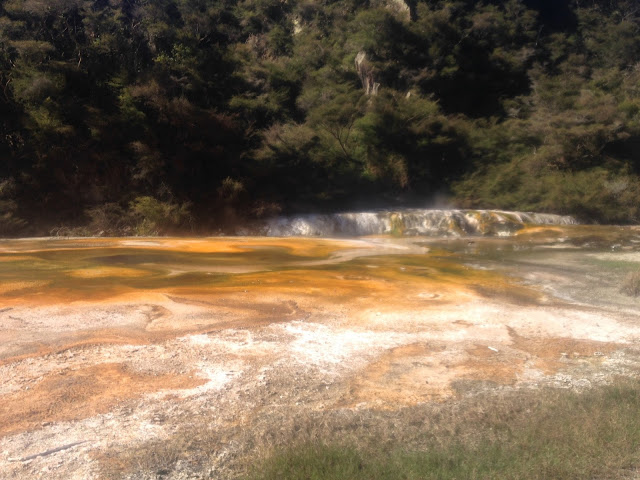 Ngaio Marsh was a New Zealander and one of the ‘Queens of Crime’ alongside Dorothy L. Sayers, Agatha Christie and Margery Allingham in the 1920’s and 1930’s.
Her lifelong love of theatre and the arts is reflected in her novels - the characters and dialogue in this novel had a  theatrical feel at times and were a bit over the top. However, there's no mistaking her skill in crafting words. I thought her description of Barbara above was deftly done and showed a deep sensitivity to a young person trying to find her footing in the world.

Suitable for about ages 14/15 years and up. The only reference to anything objectionable is Dr Ackrington's remarks which I quoted above.

Linking to 2019 Back to the Classics: Classic From a Place You've Lived
Photographs were taken at the Waimangu Volcanic Valley in the North Island of New Zealand.

Brian Joseph said…
The setting is unique. I can imagine it creating an interesting atmosphere.

I will recommend this one to my wife as she tends to like these older mysteries that seem to be original.
1 July 2019 at 02:54

Sharon Wilfong said…
Ngaio Marsh is a new discovery for me. I have just bought a couple of her books by the local bookstore. I'm hoping that I'll enjoy her and be able to add a new mystery writer to my growing list of authors I like to read.
1 July 2019 at 09:47

Carol said…
Hi Brain, she was quite a prolific author so hopefully your wife will enjoy something she wrote!
1 July 2019 at 16:52

Carol said…
I don't know that I'd gorge on her books, Silvia. I'd rather read Sayers of Tey but she has some interesting themes with her art/theatre interests.
1 July 2019 at 16:54

Carol said…
Thanks Mudpuddle. I don't know if it was this book or not but I remember reading that one of her books was published under a different title in the USA. So maybe you may have read it after all??
1 July 2019 at 16:59

Carol said…
I've only read one other book by her, Sharon, 'Opening Night' but it was ages ago & I don't remember much except it was set in a theatre. I've read one book by Margery Allingham & quite enjoyed that as well. These two ladies don't seem as popular as Christie & Sayers - or perhaps they used to be at one stage.
1 July 2019 at 17:07

Ruthiella said…
I've only read one book by Marsh before. It was called Death of a Fool and the only think I remember is that it featured Morris Dancing, which I had never heard of before. So it was very educational! I should give another title a try one of these days. I think I even have a couple on my shelves.
3 July 2019 at 09:26

Carol said…
Ruthiella, as with Dorothy Sayers, I feel I get educated about something when I read some of these authors. They're not just crime fiction authors. They really had intellects!
4 July 2019 at 16:27

Marianne said…
How wonderful. I just now mentioned to Carole on Carole's Chatter that I would love some recommendations of New Zealand authors for adults. As a teenager, I fell in love with Mary Scott's novels and re-read them at least half a dozen times since but I'd love some others.

And now you suggest one. Lovely. I always go through the contributors to Carole's Books You Loved Editions and I always find at least one book recommended by you. Thank you so much.
12 July 2019 at 19:51

Carol said…
Hi Marianne, I think she's written four other books set in NZ but I haven't read any of them. I've never heard of Mary Scott. Will check out your review.
13 July 2019 at 18:47