Back to the Classics: Requiem for a Wren by Nevil Shute (1955) 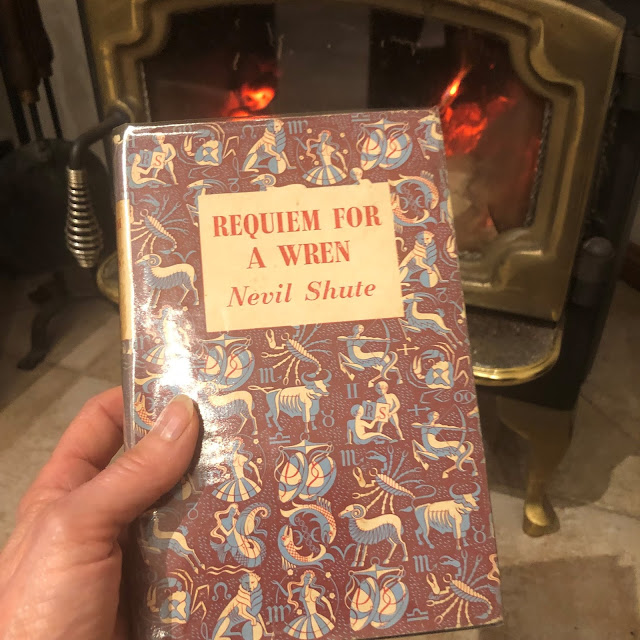 It’s been a while since I’ve read anything by Nevil Shute and this book reminded me how much I enjoy his writing. I thought I’d already read the best of his novels but Requiem for a Wren certainly deserves to be placed on a par with works such as Pied Piper, A Town Like Alice, and Trustee From the Toolroom.
Set partly in the time of WW2 and the years following, it is filled with Shute’s trademark aviation knowledge, which surprisingly doesn’t hinder this non-tech reader’s enjoyment of his writing.
I’ve previously mentioned the author’s ability to get into the skin of his characters who are never ‘standard heroes’ but just very ordinary people whose courage is called upon by unlooked for dilemmas and circumstances; common, quiet folk who rise for a short time, do what needs to be done and go back to their quiet lives. This book is no exception.
From the very first page there is a sense that this story is going to be tragic. There is an inexorable pull in that direction as Alan, the narrator, tells the story of his brother, Bill, and Janet, the young woman he would have married had he survived the war.
All three had met just before the invasion of Normandy but were never to meet again.
The brothers were Australian and the story takes place in Britain and Australia.
After the war Alan sets out on a quest to find Janet, a search that takes him back to England, across to America and then back to Victoria in Australia. What he finds out in his search poignantly reveals Janet’s character and background. Alan is determined to find her and to offer her a home with his parents on their rural property which would have been her lot if circumstances hadn’t intervened to prevent her marriage to Bill.
Unfortunately, Alan always found himself on the back foot in his search. Between Janet’s many moves, the post war confusion, his hospitalisation and rehabilitation after being seriously injured in an air battle, he would arrive somewhere expecting to find her only to discover she had moved on.


'Like some infernal monster, still venomous in death, a war can go on killing people for a long time after its all over.'

This is a sad book with a mix of mystery and WW2 events. Somehow Shute imbues his tragedies with a not altogether bleak outlook. There is some hope within the pathos.
An achingly beautiful read. Highly recommended!

For my thoughts on other books by Nevil Shute see here and here.


Linking up to the 2019 Back to the Classics Challenge: Classic Tragic Novel

i've read quite a lot of Shute but not this one... i'll remedy that as soon as i can find a copy... my favorite of his is "Trustee of the Toolroom"... probably because i used to be a mechanic, haha... nice post, tx...

Great review Carol! I've only read On the Beach but Shute,but I agree, at least in that book, his characters are "ordinary people whose courage is called upon by unlooked for dilemmas and circumstances". I have A Town Like Alice on my TBR but I know he wrote a ton of other books. Blogger Thomas @ Hogglestock reads a lot of his books and praises him as well.:D

Hi Mudpuddle, I really liked that one. I read a short bio on Shute where he said he thought of himself more as an engineer than an author. I think he managed quite well in blending the two.

A Town Like Alice was the only book of his I'd ever heard of and then I found out he'd written plenty more. Pied Piper is very good. On the Beach was rather chilling but I still liked it.

I read A Town Like Alice years and years ago, but have never read anything else by him. As famous as On the Beach is, I wonder why I never sought it out. At any rate, you have certainly piqued my interest in Nevil Shute!

Thanks for visiting my blog. :)

I've only ever read A Town Like Alice by Shute, but it's one of my all-time favorite books. I should try some of his other novels some time. :)

I have not read any of this author although I remember watching some of a mini-series titled A Town Like Alice. It was about WWII and some people who were prisoners in Japan. I still remember the one woman who was wearing high heels and as they walked that deadly march, Batan March, was it? I don't know how anyone survived that.

On your recommendation, I would not like to read some of his books.

Hi Jenclair, thanks for your comment & for returning the visit!

Hi Lark, I think his novels have some similarities but he has some unique plots & settings.

Hi Sharon, I remember parts of the movie (the one with Aussie Bryan Brown) from ages ago but I didn't read the book until many years later. From what I remember a bunch of women & children were made to walk all over Malaya, keeping on the march because none of the Japanese camps wanted them??...I don't know that it was the Bataan march??