Life Under Compulsion: Ten Ways to Destroy the Humanity of Your Child by Anthony Esolen (2015) 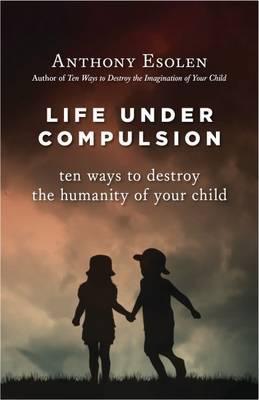 ‘How do you raise a child who can sit with a good book and read? Who is moved by beauty? Who doesn’t have to buy the latest this or that vanity? Who is not bound to the instant urge, wherever it may be found?’

Life Under Compulsion is a follow on from Anthony Esolen’s previous title, Ten Ways to Destroy the Imagination of Your Child, which I read a few years ago.
When one of my sons saw these two books in the bookcase he said: “Mum, you read some weird books! What are you trying to do to us?”
My youngest's reaction was, "No wonder some people think homeschooling's a bad idea...trying to destroy our imagination?!"
If you don’t already know, Dr. Esolen played the devil’s advocate with Ten Ways to Destroy the Imagination of Your Child, which is a little reminiscent of C.S. Lewis’ The Screwtape Letters, minus the humour.
Life Under Compulsion continues the combatative tone of his previous book but focuses on the ideas of freedom versus compulsion.
Freedom is a buzzword of our times but it is a word that has been mis-used.
Dr Esolen argues that our children are anything but free - they are slaves to compulsions that come either from outside of themselves (e.g. government mandates that control what children are taught in schools) or within (the itches that must be scratched, the passions that master them).
He examines modern culture, explains how our idea of freedom is warped and dangerous, and draws on the great thinkers of the past to help us understand what freedom truly means:


‘To be “free” is not to do as you please but rather to realise the fulfilment of your natural created being, without impediments.’

Esolen is scathing about the education system and their ‘courses in compulsion.’ When he was Professor of English at a Catholic University he wrote an article for Crisis Magazine on the university’s ‘diversity’ stance:

…a vision that pretends to be “multicultural,” but that is actually anti-cultural, and is characterized by all the totalitarian impulses to use the massive power of government to bring to heel those who decline to go along...

His incisive comments and criticism of the politically correct practices of  radical university professors resulted in student protests and faculty members calling for his dismissal in 2016. No wonder he sounds grumpy when he writes.

In Life Under Compulsion, the author examines the school system and its courses in compulsion where children must be segregated by age and must move to the next classroom at the ringing of the bell. Education is based on a utilitarian foundation and is reduced to a tool; students have to adapt themselves to the 'factory' or Teaching Machine, which is not for teaching children but for ‘socialising them.’ It doesn’t impart virtue because virtues set a people free but the system wants a ‘managed’ people.


Freedom is the movement of the heart to embrace what is good, or beautiful, or noble.
A man who cannot admire is a slave.

Dr Esolen refers to a wide variety of literature in both books I’ve read which I really appreciate: works by Sigrid Undset, Dostoevsky, Shakespeare, Pieper, Bradbury, Kipling, Dickens, Hugo, Orwell, and Chesterton, for example, but he doesn’t always provide references so if you don’t recognize the characters he’s referring to you’ll have to do some Google Searching.

Systems of Compulsion breed the unnatural, just as the unnatural requires systems of compulsion to confirm it. Consider communism, a system so insane that it could survive only by compulsion - through show trials and executions and the Gulag.

We must not think that these acts of compulsion were merely imposed upon a defenceless people, from without. They also rose from within.

Here he references Alexandr Solzhenitsyn’s The Gulag Archipelago (which I’m in the very slow process of re-reading) where the author cites the Soviet criminal code that dealt with any failure to make a denunciation of certain actions. The powers that be demanded enthusiasm for their revolution and not just a passive acceptance.

Life Under Compulsion is an important book for parents, anyone who is involved in education, those concerned about the outrage trend in society or the attempt to subject curriculum to the demands of a current political aim.
Considering the reaction to Dr. Esolen’s 2016 article, the book is even more relevant now than when it was when it was first published.

‘How do you get people en masse to submit to madness? By compulsion.’


This is a book I've chosen for the Christian Greats 2019 Challenge: No. 5)  A Philosophical Book by a Christian Author


That quote about "multi-cultural" vs "anti-cultural" is ringing in my brain. I'll be pondering that one all day.

This ones sounds like a must-read. I'll look for it.

Hi Anne, Esolen said in the first chapter that words take the place of things & we can misuse language unconsciously to reverse the order of reality & language & we do this automatically. Lots of stuff to mull over in this book. 🙂

I really like Esolen's books. I read his Ten Ways to Destroy the Imagination of your Child and it was excellent. I've also read a number of his articles in some Catholic magazines.

Hi Sharon, I’d like to get my hands on his book ‘Defending Boyhood.’ It sounds good.

Everything I've read by Esolen, just articles so far, has been excellent. I've thought of reading his Imagination book, and now this one sounds well worth the investment... the education of our society's children is something I care very much about, and even though I have no children to teach myself, perhaps just reading Esolen would make me better able to articulate my concerns.

Thank you so much for the review!

I’d like to think I was still concerned about the education of children when my children have finished, too, GretchnJoanna. There has to be a passing on of values & virtue & Esolen nails those important things - as you said, even if it’s to help us better articulate our concerns, his books are important reading. 🙂

I've been wanting to read Esolen's first book for ages but I didn't know about this second one. It sounds fascinating and very much John Taylor Gatto-ish. Thanks for the review .... it gives one much to think about.

I would never have thought of comparing him with Gatto, probably because I haven't read anything by Gatto for quite some time - I heard him speak when he was in Sydney years ago. They do share similar ideas & raise the same sort of questions. Esolen is clearly coming from an orthodox Christian viewpoint though.