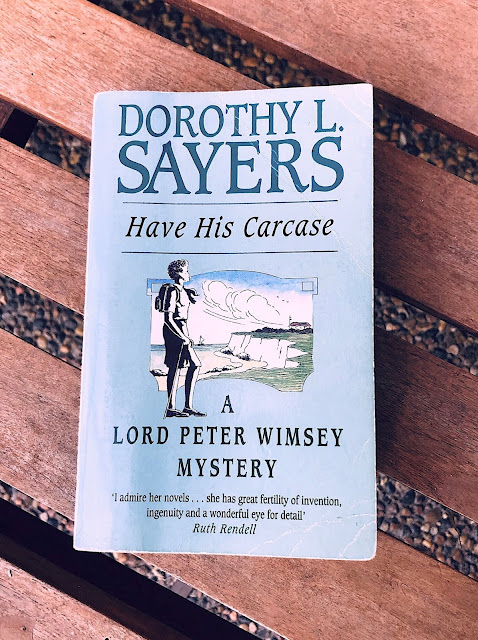 Have His Carcase is the second book by D. L. Sayers to feature Harriet Vane who was first introduced in Strong Poison (1930) when Lord Peter Wimsey decides she is not guilty of a murder charge and sets out to prove it.
I’ve been filling in the gaps of my Sayers’ reading lately and Have His Carcase was one of the books I decided to read. It’s been quite a few years since I read Strong Poison and I don’t remember a great deal of it so I probably should have read that again before this one. I do remember quite a bit of Gaudy Night which comes after Have His Carcase, though.

Harriet Vane, the detective novelist, has just been acquitted of murder and embarks on a walking tour along the south-west coast of England.

'The best remedy for a bruised heart is not as so many people seem to think, repose upon a manly bosom. Much more efficacious are honest hard work, physical activity, and the sudden acquisition of wealth. After being acquitted of murdering her lover, and indeed, in consequence of that acquittal, Harriet Vane found all three specifics abundantly at her disposal; and although Peter Wimsey, with a touching faith in tradition, persisted day in and day out in presenting the bosom for her approval, she showed no inclination to recline upon it.'

While on a deserted beach she discovers the body of a young man whose throat had been slashed and after some sleuthing she heads to the next town to report her findings. During this time the tide comes in and the corpse disappears. Once again Harriet Vane is drawn into the investigation of a murder where she is a possible suspect.

Lord Peter Wimsey gets wind of the situation and turns up at the hotel where she is lodged. Wimsey is still pursuing Harriet and much of the banter between them is just delicious. Harriet is having breakfast when he arrives on the scene:

‘Good morning, Sherlock. Where is the dressing gown? How many pipes of shag have you consumed? The hypodermic is on the dressing-room table.’

‘How in the world,’ demanded Harriet, ‘did you get here?’

‘Car,’ said Lord Peter, briefly. ‘Have they produced the body?’

‘Who told you about the body?’

‘I nosed it from afar. Where the Carcase is, there shall be eagles gathered together. May I join you over the bacon-and-eggs?’

‘By all means,’ said Harriet. ‘Where did you come from?’

‘From London - like a bird that hears the call of its mate.’

‘I didn’t mean you. I meant the corpse. But still, talking of mates, will you marry me?’

Harriet is attracted to Wimsey but complicating their relationship is the offence she feels at Wimsey’s patronage towards her. She resents the gratitude she owes him for getting her out of a death sentence. His influence protects her from the hostility of men like Inspector Umpelty and the sensationalist reporter of the Morning Star, Salcolme Hardy, and she is bitterly distressed about this.

Wimsey had been building cautiously building a ‘delicate structure of confidence’ between this ‘scathed and embittered woman and himself’ but this new situation threatened to annihilate what he had built.

'You think you can sit up there all day like King Cophetua being noble and generous and expecting people to be brought to your feet...You think if you go on long enough I ought to be touched and softened...I suppose every man thinks he’s only got to go on being superior and any woman will come tumbling into his arms.'

Wimsey’s reply to this outburst reveals his heart and his often comic behaviour when he’s around her. According to him he’d have a better chance if he was, ‘deaf, blind, maimed, starving, drunken or dissolute,’ so that she could have the fun of being magnanimous!
He treats his deepest feelings in a comic way to save himself the pain of her being disgusted by them. Poor Peter.

This tussle between Harriet and Wimsey is cleverly portrayed. Amusing but at the same time poignant. As usual, Sayers' plot is clever and inventive; full of connections and rabbit trails. A chapter is basically devoted to the pair working on a cipher that the deceased had used in some letters he wrote, but it went over my head. Puzzles are not my strong point.
I was a little disappointed with the ending to this book. The crime was solved but the evidence was such that a jury would likely reject it so it was left hanging, so to speak. Apart from that, this was an enjoyable and intelligent read.

Moozle has just started reading some of Sayers’ Lord Peter Wimsey books and read this after me. (I think some of her books are more suitable for older readers but this one was O.K.) She really enjoys them and said that she ‘gets’ many of the literature allusions & ramblings because of all the literature she’s read over the years such as mythology & Shakespeare, plus bits of Latin and French, both of which she’s been studying. I have to credit Ambleside Online for introducing us to a lot of that goodness.

These are the Sayers’ books I’ve read & written about:

This sounds very good. I have read so few mysteries. I need to jump into the genre. I believe that I would enjoy many of the authors. My wife has read some Sayers and and liked what she has read.

i recall thinking while reading this that Wimsey was being a bit of an ass... and in some ways not very adult; but it was a good book nevertheless...

I loved the Harriet/Lord Peter courtship when I read the books. It's been ages, however. The only title I've re-read since my 20s is The Nine Tailors.

I think that is wonderful that your daughter is getting more out of the novels because she is acquainted with classical literature. I wish I could say the same!

I only have read Strong Poison and Gaudy Night.
Amazing comment by Moozle. You have really planted her feet in a broad room.
I love Lord Peter!

Hi Mudpuddle, it took me awhile to appreciate Wimsey. This book reveals why he behaves like an ass so the more I've got to know him as a character, the better he seems. :)

Hi Ruthiella, I have so many holes in my education so I'm always surprised she 'gets' so much.
I've just finished Busman's Honeymoon so I'll probably read The Nine Taylors next.

Sayers is a huge favorite of mine. I'm not sure but I may have read all her novels. I know that I've read the short Wimsey stories. Still, I cannot recall Have His Carcase. I do know that Gaudy Nights was my over all favorite. I was literally chomping at the bit to see who was behind it all.

Hi Sharon, that was my favourite but then I read Busman’s Honeymoon & now that might be. The problem is it’s been quite a few years since I read Gaudy Night so i don’t have a clear memory of it. One day I might re-read them in order & then decide. :)