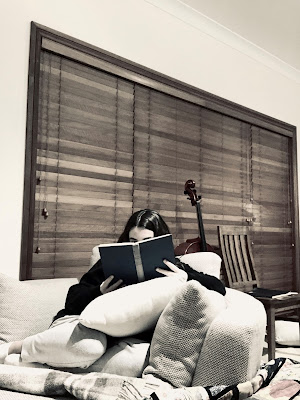 I asked my 15 yr old daughter to write a few words about the books she's enjoyed - she reads A LOT, so the following are books she's read or re-read recently or those that first came to mind about an hour ago when I asked her.

I love this book! I love how independent and smart the main character is. Actually, as well as 'Moccasin Trail,' this is my other favourite book. Apparently my older brother really liked it as well. Surprise, Surprise. I wasn't really expecting that. I didn't think it was the sort of book boys like, partly because it's about a girl, but looks like I was wrong. Or maybe it's just him... Anyway, I don't think this is the sort of book I'll ever grow out of. There are some books that you never get tired of, and this is one of them. I've re-read it a million times and I still love it. When you can do that, you know you have a good book.
Ages 14/15+

Lord of the Rings - J.R.R Tolkien

In This House of Brede - Rumer Godden

This book is just beautiful. And that's really all I can say. Although it's not an 'adventure story,' which is the kind of book I prefer, this just grabbed me from the start. It is a very quotable book, which is great for getting my commonplace entries done and dusted! A very gentle sort of tale, but it's somehow raw at the same time.
Ages 15+

Now this is probably my favourite book of all time. It just never gets old. It has plenty of adventure, and I just fell completely in love with it . I love the way McGraw shows the characters. You really get to see them. In a good way. When I first read it a few years ago, I wasn't expecting it to be any good, and I think I was still a little too young to appreciate it. I didn't really read it properly, just skimmed through, and I wasn't impressed. Then, about two years ago, I decided to re-read it. And I was hooked - line and sinker. I didn't see how I could have read it before and not loved it!
Ages 12+

Mathurin Kerbouchard travels across Europe, seeking revenge, knowledge, and danger. The tale takes you across Europe, Russia and the Byzantine Empire, and is set in the twelfth century, a magnificent time of discovery, knowledge, wonders, and intrigue. Kerbouchard moves from place to place, ultimately with the view of completing his mission, and along the way he finds himself in the role of a slave, physician, scholar, and merchant, but always a warrior. This book sweeps you up in danger, excitement, adventure, and, always, a little love along the way. Although the character might be considered 'larger than life,' I think it's nice to have that occasionally. I mean, that's what fiction basically is, the product of the author's imagination. This has lots of excitement and fights, and it really is a 'page turner,' but another thing l love about it is the time frame. It's just such a fascinating period. There was so much going on, whether it was discoveries or kingdoms being forged, or whatever, and it's so colourful, and full of life. The author does a really good job of including history without making it boring and dry.
Ages 15+

The Man in the Brown Suit - Agatha Christie
Ages 14+

Crocodile on the Sandbank - Elizabeth Peters

The whole time I was reading this I was emitting loud snorts. Everyone probably thought there was something wrong with me. I couldn't help it. It reminds me a little of 'The Man in the Brown Suit,' which is another of my favourite books. Most of the book is set in Egypt, in an archaeological area, and I loved that. It is very laugh-out-loud funny. That sounds like a movie review, but it's true. Definitely a favourite. As soon as I finished I started reading it again. I've never met anyone else who does that though, so maybe that's just a me thing. Anyway, it's good.
Ages 15+

This is a bit different from Margery Allingham's other mysteries, as the main character has lost his memory from a bonk on the head, and all he can recall is that he's supposed to be doing something very important. I really enjoyed it, and I liked the deviation from the norm of detective novels. What I like about Allingham's books is they aren't the typical who-dunnit. There is more going on than that. It doesn't sound particularly amazing, but it really is a good book.
Ages 15+

This is one of the first Inspector Alleyn books, and in my personal opinion, one of the best. I think I like Alleyn best out of all the 'Inspectorish' characters I've met in detective novels. And I really like how Ngaio Marsh doesn't write down to you. You have to read up to her, so to speak. It makes for a much more interesting, and in a way, challenging read. Which I much prefer to books that say nothing you didn't know already. It is probably my favourite book by her.
Ages 15+

Ooo! Thanks! Just in time to start shopping for my oldest daughter's birthday. :) Thanks, Carol.

I have just discovered Ngaio Marsh and so far have enjoyed all the books I've read so far. I thought Christie's Man in the Brown Suit interesting since it was one of her early mysteries and there's no Miss Marple or Hercule Poirot.

I never got into Allingham. Too much going on that doesn't seem to contribute to the story. At least that is what I found with the two books I tried with her.

The others look really good. I'll have to check them out.

It gets harder to find books they haven't read after a while, Amy! I'm always on the look out for good authors.

I loved Seven Daughters and Seven Sons when I was a teenager too! (A LONG time ago.) I'm so glad it's still being read and enjoyed.

Hi Lory, it's been a favourite of a couple of my children. It's also an unusual sort of story.

I was almost reluctant to give this to my daughter. I thought it would be too slow for her & didn't want to turn her off Godden so I was pleasantly surprised by her reaction to it.

Wow, tell her thanks very much from another homeschooling family. My youngest is 16yo son, so these recommendations of mystery and adventure might be just the thing. The ones we've read, we agree with :)

Will do, Paula. I wasn't aware that you homeschooled. :)