Martin Chuzzlewit by Charles Dickens: A Study of Selfishness

‘My main object in this story was, to exhibit in a variety of aspects the commonest of all the vices; to show how Selfishness propagates itself; and to what a grim giant it may grow, from small beginnings.’ 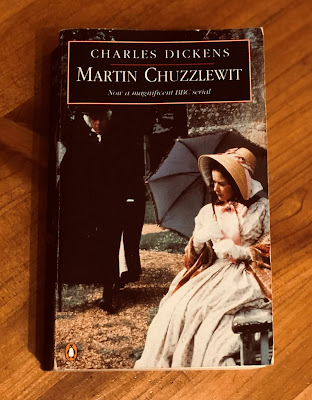 This book isn’t one I’d planned to read & it’s not a Dickens’ title that had come to my attention at any time, but I saw it at a book sale and bought it because I hadn’t read anything by Dickens for a while.
It sat unread on my book shelves for some time until one night when I was considering which book I should start reading next but couldn’t make up my mind. I’d just finished The Lord of the Rings, which I’d put off for years (and found to my surprise that it was hard to put down) so when my eyes came upon Martin Chuzzlewit, I thought, ‘I’ll just read the first chapter and if I can’t get into it, I’ll choose something else.’
Well, I kept going and that was that. From memory, it usually takes me a few chapters to engage with Dickens so I was surprised at how quickly it happened with one of his books that doesn’t seem anywhere near as popular as many of his others.


Martin Chuzzlewit (1843-4) first came out in monthly installments but unlike Dickens’ previous books, The Old Curiosity Shop, and even Barnaby Rudge, sales were low for various reasons: he had abstained from novel-writing for a time and this caused him to lose ground with the public; when he did return to publishing he released the chapters monthly as opposed to weekly, which was his previous practice; his reputation declined after the public’s disappointment with Barnaby Rudge.
After the poor reception of the first instalments of Martin Chuzzlewit, Dickens decided to change some aspects of the story and set parts of it in America where he had recently spent some time. (He wrote a record of that journey in American Notes.)

Dickens himself considered Martin Chuzzlewit his best work and when it was published in book-form it proved to be one of his greatest successes.
Not only is Martin Chuzzlewit a study in selfishness, it also concerns itself with how suffering shapes character. Oswald Chambers said that ‘Sorrow burns up a great deal of shallowness, but it does not always make a man better’ and Dickens’ demonstrates the effects the same circumstances may work for better or worse in different people. Chambers also observed that if you yield in childhood to selfishness, you will find it the most enchaining tyranny on earth. Some of the characters in Martin Chuzzlewit never broke free of those chains.

Dickens’ satire on the Chuzzlewit family portrays ‘the poison of selfishness as transmitted within a family,’ and the ‘false notions of family grandeur and the parasites which they breed.’
As usual, there is a large cast of characters in the story but I thought there were many more likeable persons here compared to some of his other books and more redemptive aspects in the characters’ lives.
I really enjoyed the developing friendships between some of the young men. The loyalty and unselfish regard they had toward one another stood out in comparison to the opportunistic relationships in the greater Chuzzlewit family.

Martin Chuzzlewit: the young protagonist of the story; he had fallen out with his Grandfather, of the same name, who had brought him up, and now struck him out of his will. Martin junior was frank and generous by nature but his upbringing had allowed him to grow selfish. Circumstances opened his eyes to see others he had taken for granted and used.

'Martin - for once in his life, at all events - sacrificed his own will and pleasure to the wishes of another, and consented with a fair grace. So travelling had done him that much good, already.'

Mr Pecksniff: an absolute hypocrite and selfish to the core.

'He was a most exemplary man: fuller of virtuous precepts than a copy-book. Some people likened him to a direction post, which is always telling the way to a place, and never goes there.

(His) detractors thought he bore a fanciful resemblance to his horse, not in his outward person but in his moral character - full of promise, but of no performance.
He was a kind of animal who infused into the breasts of strangers a lively sense of hope, and possessed all those who knew him better with a grim despair.’

His comment on seeing a beggar on the street: ‘If everyone were warm and well-fed, we should lose the satisfaction of admiring the fortitude with which certain conditions of men bear cold and hunger.'

Tom Pinch - unpretentious and noble-souled; his Grandmother had skimped and saved to allow him to enter Pecksniff’s service as a student of architecture after he had dazzled her with prospects of Tom’s happiness and advancement. ('Pecksniff’s genius lay in ensnaring parents and guardians, and pocketing premiums.') And poor Tom was completely take in by the man.

One of the characters who undergoes a transformation of character (but I won’t spoil the story by mentioning names):

‘I never thought at all; I had no thought, no heart, no care to find one; at that time. It has grown out of my trouble. I wouldn’t recall my trouble, such as it is and has been - and it is light in comparison with trials which hundreds of good people suffer every day, I know - I wouldn’t recall it tomorrow, if I could. It has been my friend, for without it no one could have changed me; nothing could have changed me.’

I agree with Dickens that Martin Chuzzlewit is one of his best stories and I highly recommend it.
Moozle, who is 15yrs of age and has never taken to Dickens (I think The Old Curiosity Shop turned her off!) was hunting for something to read and agreed to try MC after I said how I enjoyed it. I’m very happy to say that she actually liked it!!


Linking to the Back to the Classics Challenge 2020: 19th Century Classic

Labels: 19th Century 50 Classics in 5 Years Back to the Classics 2020 Charles Dickens Classics Formation of Character The Classics Club

Laura Jeanne said…
Thank you for this review! I don't think I have even heard of that book, and now I'll be sure to seek out a copy. It sounds excellent.
1 June 2020 at 23:48

mudpuddle said…
impressive review! i liked this a lot. i'd say i liked it the best of any Dickens i've read, except my recollection of his works has faded with time... i recall Dickens was W.C. Fields favorite novelist: he read his books over and over... maybe not germane to this comment, but i just happened to remember it, lol...
2 June 2020 at 02:27

This is one of the Dickens novels that I have not gotten to yet. I will eventually read it. The book sounds very good. I have heard that from several other people too. The characters as you describe sound very much like Dickens and very well done.
2 June 2020 at 08:37

Carol said…
Mudpuddle! I should have known that you would have read it! It seems like people either love or hate Dickens. I was pleased to find another great book of his after I thought I'd read all his best ones. I have a copy Edwin Drood that I haven't rad yet but as it was unfinished I'm a little reluctant to start it.
3 June 2020 at 11:58

mudpuddle said…
i read E Drood sometime ago and it was a bit tantalizing but that's about all... i didn't think the writing was up to Dicken's usual standard...
3 June 2020 at 14:35

Sharon Wilfong said…
I haven't read Dickens in a while either and I don't know when I'll get around to reading him. I did see an excellent performance of MC on television. It was a series and well worth watching.
3 June 2020 at 15:42

Carol said…
Thanks for your opinion on Edwin Drood, Mudpuddle. I'll give it a miss for now. Barnaby Rudge & Pickwick Papers are the other two Dickens'(novels) I haven't read. If you have any opinions on their worth I'd appreciate them. :)
4 June 2020 at 12:23

Paula Vince said…
You've made this story and its characters sound very appealing for when I come to choose my next Dickens novel to read. I was toying with A Tale of Two Cities, but Martin Chuzzlewit is on my shelf too, and I'm now thinking of prioritising it :)
4 June 2020 at 19:42