Trustee From the Toolroom by Nevil Shute...don't judge a book by its title 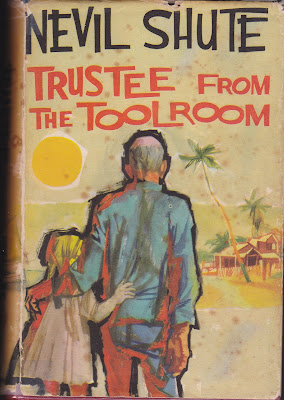 Nevil Shute was an engineer by background and Trustee From the Toolroom sounded to me like something related to that field - not my cup of tea. But I was wrong and I'm grateful to Eric Schonblom, the author of the Constance Savery Website, who recommended it to me knowing that I'd read and enjoyed some other books by this author.
Well, the main character, Keith Steward, does work in a toolroom, and has a model engineering workshop in his home and writes weekly articles for the "Miniature Mechanic," but the book is really about a very ordinary man who suddenly finds himself endowed with a trust - his ten year old niece -  and in his determination to be faithful to that trust, is plunged into exceptional circumstances.


...he wore a greasy old raincoat and an equally greasy old soft hat; he had a shabby muffler round his throat. He was pale with lack of sun and exercise, and running a bit to fat. He looked, as he sat in the trolley bus taking him to Ealing Broadway, like any one of thousands of men to be seen in buses in any industrial district, and he was.


From his ugly house in the west of London which he and his wife were still paying off, with very little money and no knowledge of the world outside of England, he finds his way to the other side of the world in the search of his niece's inheritance. Along the way he encounters people who have relished and benefitted from his engineering articles and discovers that his small acts of kindness and devotion to his work over the years have opened doors in the most unlikely places.


Keith Stewart had never had a shower in the whole of his life. he had seen them in shop windows and had read about them, but one had never come his way.

He would have to have some money in his pocket, and they used dollars here, it seemed. He had never cashed a traveller's cheque before...

Keith sat at the helm, terrified. he had never sailed a ship of any sort before. Now he was in sole control of this rushing, heaving monster which towered above him in a mass of brown sails and rope whose very function was a mystery to him.

Nevil Shute usually manages to insert quite a bit of technical information into his novels, especially about aircraft, and he does so in this book also, but his knack for weaving a compelling story around the technicalities makes them palatable. Even to someone like me who still can't work out how to set our electric alarm clock.

Linking up with Booknificent Thursdays

In my life, I've grown to appreciate the stories of ordinary people who go to great lengths in faithfulness. Sounds good.

This book looks really good. I am intrigued. Thanks for sharing your thoughts on this book at Booknificent Thursday this week!
Tina