Back to the Classics Challenge 2016 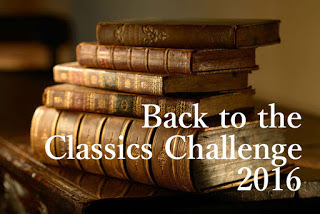 This year I'd like to concentrate on reading books I already own but  haven't got to reading yet. I'd also like to re-read some books I read when I was younger now that I presumably have the hindsight of maturity. I enjoyed the Back to the Classics Challenge for 2015 so I'm signing up again this year. For details see Karen's sign up post at Books & Chocolates.
I don't own all the books for some of the categories for this challenge so I'm hoping to fill in the gaps with borrowed books. I also can't decide between some options that's why you'll see more than one title in some (most) categories.

Far From the Madding Crowd by Thomas Hardy, 1874. I'm pretty certain one of the boys is getting me this for my birthday.

The Home-Maker by Dorothy Canfield Fisher, 1924

The Scent of Water by Elizabeth Gouge, 1963 (borrowed from a friend)

Sense and Sensibility by Jane Austen, 1811

The Imitation of Christ by Thomas a Kempis. Originally written in the 1400's and later translated into English from Latin.

Unsure of which book I'll choose. Some ideas are:
To Sir With Love by E. R. Braithwaite, 1959
Up From Slavery by Booker T. Washington, 1901
Invisible Man by Ralph Ellison, 1952.


6.  An adventure classic - can be fiction or non-fiction.

Full Tilt: Ireland to India with a Bicycle by Dervla Murphy, 1965 - or any one of a number of titles I own in this category.
The Tragedy of the Korosko by Arthur Conan Doyle, 1898

The Day of the Triffids by John Wyndham, 1951, or
We by Yevgeny Zamyatin (I discovered this author when I read an essay by Alexandr Solzhenitsyn). I don't own either of these but have wanted to read them for a while.

I've got oodles of books in this category but I haven't read a lot of them as I originally collected them for my children and didn't develop an appetite for this genre until more recently. Yet to decide, but Hamlette complicated matters for me when she asked if I'd ever read anything by Raymond Chandler. I hadn't, but I did see one of his books (The Big Sleep, 1939) in a bookshop recently...temptation, temptation.

Cover Her Face is P.D.James' debut 1962 crime novel which I would like to read sometime.


9.  A classic which includes the name of a place in the title

Hiroshima by John Hersey, 1946, or
Wuthering Heights by Emily Bronte, 1847
Decision at Delphi by Helen MacInnes, 1960

10. A classic which has been banned or censored.

I'm thinking it will be one of these:

The Agony & the Ecstacy by Irving Stone, 1961 (biographical novel about Michelangelo Buonarroti)
Phantastes by George Macdonald, 1858.


12. A volume of classic short stories. This must be one complete volume, at least 8 short stories. Children's stories are acceptable in this category only.


at December 16, 2015
Email ThisBlogThis!Share to TwitterShare to FacebookShare to Pinterest
Labels: Back to the Classic 2016, Classics, Literature, The Classics Club

Looks good, Carol! I'm almost done with Thomas A Kempis and I want to finish up a novella too...I'm down to the wire here for 2015! :)

The Home Maker was interesting, btw! :) I'm having a hard time with the title with a place name in it...I've read many of the ones I can think of!!!

Far from the Madding Crowd was one of my favourites I read this year. I'm thinking of starting on Thomas a Kempis as well...both reading it in Dutch and English. Love your choices!!

Amy, here are some that I've read & loved: The Mayor of Casterbridge by Thomas Hardy; books by John Buchan - some of them have place names eg Witch Wood (a very interesting book) & The Island of Sheep; The Tennant of Wildfell Hall by Anne Bronte; Alas, Babylon by Pat Frank(post-apocalyptic novel); The Legend of Sleepy Hollow; The Prisoner of Zenda by Anthony Hope; Girl of the Limberlost; Jamaica Inn by Daphne du Maurier; Napoleon of Nottinghill by Chesterton - bizarre but worthwhile; Agatha Christie has a number of titles with place names; I haven't read these but they're on my list for one of these days - In This House of Brede - Rumer Godden; Brideshead Revisited...

I've wanted to read Madding Crowd for awhile so when my son asked me what book I'd like for my b/day I suggested that. I think I'll just stick to the English translation of Kempis!!

I also have Thomas A Kempis on the shelf. I've started him but never finished, but perhaps I shall read it in its entirety for next year? Good job. Loved your list. Not sure if I have the ability to read THAT many books, but I am considering joining in for some of it. :o)

You can use audio books for some of them, which may make it more do-able for you, Deborah. Even if you make out a list & don't get to do them all, it just helps to give some direction to your reading - I changed a few from my original list & also used a couple of our read alouds to fill the categories. You only need to choose 6 books to join in.

Far from... intrigues me, I may read Kempis again.

Carol, I love how you added dates to the books, I must do that.

I read the Home Maker and while interesting, in time, I have come to find not such a strong classic, but it merits a read, it's a short book. It has Montessori influence you can tell.

I'm also going to confess I am not a MacDonald fan, gulp. I enjoyed Phantastes (I think I did not finish it), but maybe it's a mood thing. I didn't like Kristin Lavransdatter the first time and now I do.
I love reading your choices.

Although I have read Phantastes it was a long time ago & I don't remember anything much about it. Maybe that's not a good sign! I've read one of his children's stories but wouldn't say I really enjoyed it.

Lots of great books on your list -- I read Far From the Madding Crowd last summer (after I saw the movie) and I loved it. Also loving your ideas for 20th century classics -- The Homemaker is really great, also Decline & Fall is pretty hilarious! Thanks for signing up for the challenge!

I am curious about what you think. It has a great allegory power (that's MacDonald,right?), but he is not my favorite for some reason.

There are many English translations of Kempis,I read a more recent one, and it made it far easier by familiarity, older translations may have an added beauty bonus.

Fixed it. Thanks for pointing out my slip & the recommendation!