William Hatfield was the non-de-plume of Englishman Ernest Chapman, who emigrated to Australia in 1912 by working as a ship's steward. Arriving in Port Adelaide in the middle of summer, he jumped ship and struck out on foot for 'the interior.' With just the clothes on his back, and a cloth cap on his head, he reached Glenelg at sundown after walking in temperatures of over 110 degrees Fahrenheit.
The next day he had his first job - painting the exterior of a hotel. This lasted three weeks, and not long afterwards he was on his way to the centre of the continent. His aim was to see the enough in his travels to enable him to write about it one day. 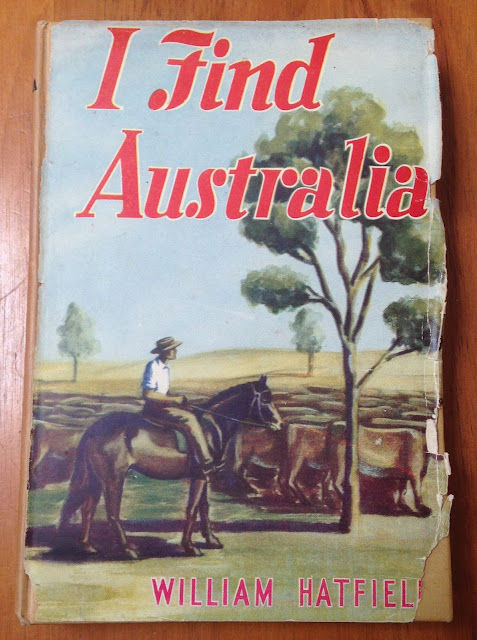 I Find Australia is an autobiographical account of Hatfield's adventures and observations of Australia as he worked and travelled in mostly remote areas over the course of about 20 years.
When he first arrived in Australia, the author had basically no practical skills, but in his years of outback travel he became a skilled bushman, worked as a kangaroo shooter, dingo trapper, on sheep stations and cattle drives, and later became a well known author.

Unless you happen to be an astronomer, professional or amateur, you can go through life without really seeing the stars if you never camp out. And unless you camp out in the dry air of the desert, you will never believe, even then, what makes the traveller put them so rapturously into his tales.
You have to lie down clear of any trees somewhere out in the plains, looking straight up without tilting your head, to get the real beauty of them, the magnificence if it all. Out there in that dry air the stars won't wink. I had heard that only atmospheric moisture  gave stars the appearance of twinkling in and out, and here was proof, at any rate, that the air we were in was dry.

* This book is similar to A Fortunate Life by A.B. Facey in that it depicts a very different Australia from that of today. Facey's book was mostly set in Western Australia and although Hatfield's travels took him all over the continent, his book concentrated on Central and Eastern Australia. The two books complemented each other very well in that regard, although they were very different from each other in other ways. Facey's book included some good basic outline maps; Hatfield's didn't, and I wish publishers would think to add them to these types of books.

* William Hatfield was sympathetic to the Aboriginal people, which surprised me in a book written in the early to mid 1900's. He includes some derogatory words, 'n----r' etc but I don't think they reflected his personal stance.

The first handling of Colts was carried out mostly by black boys, a thing that came as the biggest contradiction I had to swallow in all my Australian experience, these men of a race classed by ignorant observers in the first place as the lowest species of humanity on earth; lazy, useless, cowardly and incapable of organised effort.
Instead of which I found them doing most of the stock work on all the big unfenced runs, where their bushcraft is unmatchable, doing all the hardest riding on all the roughest horses...

They knew each individual horse's track in the mob once they had seen it, and could follow it wherever it went, no matter how many others crossed it. Our finger-print experts lay down the assertion that no two men's fingers leave the same print. The blackfellow lays down the same thing with regard to tracks. The difference in his case is that he doesn't need charts and a microscope, relying entirely on his eye and his memory.

Being unlettered, they could not count, but they could tell by sight that a few sheep were missing from a mob of two or three thousand. They saw individuality in sheep, where we just lump them as so many ewes, lambs, wethers, or whatnot.

A personal tragedy drove Hatfield to search for the man who had been the cause of it. He was consumed with getting his revenge and at one stage in his quest ended up stranded in the desert. It was there in his search for water that he met an Aboriginal man whose tribe had been responsible for a white massacre. He, too, had his own personal vendetta and would have killed Hatfield if the white man's knowledge of tribal ways hadn't intervened and spared him. He spent some time wandering with the tribe, waiting for the rain, which eventually came in torrents, experiencing the hospitality due to a friendly visitor.  It was there in the desert that he came to realise that if he continued on his course, he was doomed to end his life as a wanderer. There would be no peaceful old age for him.

And I looked on that soft new green spreading over the desert under the rain's caress and knew that it was good to live and let live...

And I rode away from old Grungunja's camp wondering what that old wizard of a stone-age race knew of the things he had done to me.

The book is out of print but not too difficult to find secondhand; it is 348 pages in length and includes a few black & white photographs. 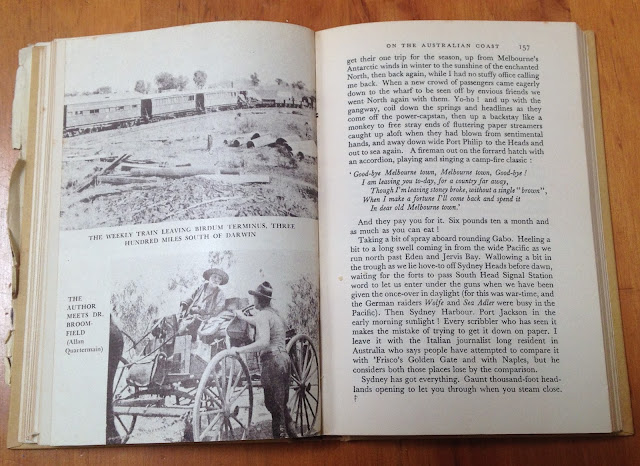 I Find Australia was included as a Geography selection for Grade 10 in the Charlotte Mason/Parents' National Education Union (PNEU) curriculum. I'll be adding it to our 20th Century plans which I'm adapting from Ambleside Online Year 11.

Some information on William Hatfield can be found here & here.

Amazing. They ought make a movie of it!

It would make a great movie, Christine, but it's not a well known book, unfortunately.

Merry Christmas! I always enjoy your selections.
I am looking forward to your Year 11 adaptation. I am finding I need to look at Y11 to satisfy BOSTES for Y10.
I am considering Endurance as a geography/biography for Y10.
Your snailery encouraged me to reconsider Anna Comstock's book. I am adapting the topics to the Australian Nature Studies book.

Merry Christmas to you also, Margaret! Endurance would be a good option. There's enough in Year 11 to spread out over two years so I don't think you'd run out of options.
I do like the Handbook of Nature Study with its focus on helping the teacher to present ideas prior to the actual study, even if we have to adapt some things. I probably should have some plan for working through it more methodically so I get the most out of it. Let me know if I can help you out with the loan of any of our books.

I Find Australia sounds fascinating! I'll have to see if I can find it locally when we reach the 20th century. :-)

I have never heard of this book, but it sounds fascinating, and I loved the excerpts you shared here! I'm so glad you shared this at Booknificent Thursday on Mommynificent.com this week!
Tina